Apple today updated its Apple Store app for iOS with support for Passbook, one of the new features found in iOS 6 and support for Siri, the operating system’s on-board virtual assistant.

The update, which brings the Apple Store app to Version 2.4, will bring support for both Siri and Passbook once its updated, making it much more useful to those wielding devices with iOS 6 and Siri.

These are huge upgrades for an application that has been sorely missing support for both of these iOS features since Apple rolled out the new and improved Siri and Passbook with iOS 6 back in September. 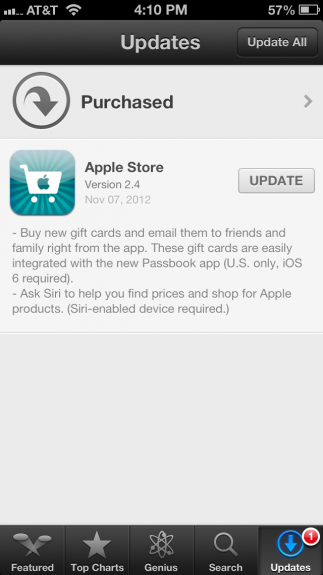 The Passbook compatibility means that users will be able to buy gift cards for the Apple Store which then can be stored using Passbook and used in physical retail locations using the application.

Passbook is a new app in iOS 6 that turns the iPhone into a wallet for tickets, loyalty cards, coupons, gift cards more. The app is still waiting for more companies to jump on board though there are many that have already thrown their support behind the feature.

As for Siri, owners devices that use Siri will now be able to search for products in the Apple Store. This is extremely useful for those that don’t want to have to open the app application or the web every single time they want to take a look at a new Apple product or their pricing.

While not a massive update, it’s good that Apple finally has got around to updating its own applications with Passbook support as for many, the application remains an afterthought amongst the other features in iOS 6.

As time goes on, expect more companies to include Passbook support with their applications and don’t be shocked to see plenty of gift cards being used this way once the holiday season ends.