The Mac Pro release date is confirmed for this month and it may be very close as the Apple Store online began selling a Sharp 4k display in the European Apple Store before pulling the display.

Apple announced the Mac Pro in June and confirmed a December Mac Pro release date during the iPad announcement in October, without giving a specific date.

This 4k display offers a 32-inch screen with a 3840 x 2160 resolution, effectively offering room to place the equivalent of four HD displays on the one screen. according to listing shared by MacRumors. 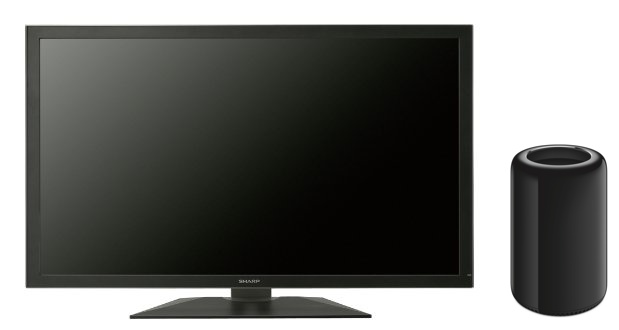 The Mac Pro release date may be near as Apple accidentally starts selling a 4k display from Sharp.

Apple did not start selling the 4k display on the U.S. store and it is no longer available in the European Apple Store. It’s possible Apple pushed this 4k display live in the store by accident, during preparations for the Mac Pro release.

The Sharp 4k display that Apple briefly sold on the Apple Store is available on Amazon from several sellers and is also on sale at B&H Photo for $3,294.

According to rumors from earlier this month, the Mac Pro release date could land on December 16th, after a third-party retailer offered pre-orders for the Mac Pro and a French Apple blog tweeted that delivery of the Mac Pro will take place on December 18th.

This is not an Apple 4k display or a Thunderbolt Retina Display that some Apple fans are hoping to see in the near future. An Apple 4k display would be an unlikely surprise this late in the game. Apple would have likely announced an item of this importance at the event the company made the Mac Pro release date announcement.

The Mac Pro supports up to three 4k displays and the late 2013 MacBook Pro Retina notebooks can drive a single display. 4k Displays are quite pricey, but there are affordable options to be found. Amazon sells the Seiki 39-inch 4K display for $405. There are already a number of MacBook Pro Retina late 2013 owners using this display as a 4k display,

The video above shows this Seiki 4k display in use with the latest MacBook Pro Retina models, covering some of the details you should know before making the plunge.