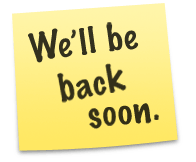 Apple’s online store has been down for at least three hours ahead of the iPad 2 launch, suggesting the iPad 2 will be available for order immediately following the 10am announcement. Apple.com is typically takes its online store offline when it is gearing up to begin selling a new product.

A message at store.apple.com reads: “We are busy updating the store for you and will be back shortly.”

Apple has truncated the time between product announcement and availability more than any other consumer electronics company. Just last week it announced the new MacBook Pro  line and immediately began selling it online and Apple retail stores. Retail partners, such as Best Buy, were well stocked and began selling the MacBook Pro the same day.

There is a chance that Apple will only be taking pre-orders for the iPad 2, but if that’s the case they should be available pretty quickly. Apple turned off the supply spigot of the original iPad last week to retail partners and Apple likely doesn’t want to go more than a couple of days without selling one of its most popular devices.

The Apple iPad 2 event kicks off at 10am Pacific.