Apple and Samsung have been going back and forth about the design of the Galaxy Tab for months now, and it seems that Apple has decided it was time to help Samsung out.

Apple offered up a list of ways Samsung could change the Galaxy phones and the Galaxy Tab 10.1 to avoid a sales ban. Reportedly the new Galaxy Tab 10.1N doesn’t meet these requirements to Apple’s satisfaction.

Some of the suggestions, you can see on devices like the Galaxy Nexus, but most of these solutions read like a David Letterman Top Ten list of fictional solutions to the design bickering. In fact, the list is so out there I would have thought it was a joke if I didn’t see the legal document Apple filed to give Samsung some of the worst design advice possible.

In short, Apple would really like Samsung to make a square tablet, with sharp corners, with a bedazzled front and a thick form factor.

The Verge waded through the mind numbing court filing to find the following design suggestions from Apple to Samsung. It turns out the best way to prevent competing tablets from looking nice is to try and legislate ugliness. 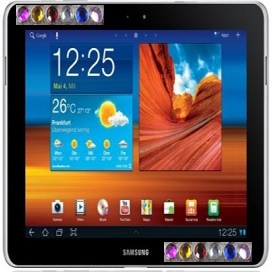 Perhaps Samsung should just go ahead and introduce the Pyramid Pad with a complementary pack of stickers to keep the front cluttered.

What do you think of these design suggestions? Should Apple be the only company that can make beautiful phones and tablets?