With every new iPhone there’s some sot of controversy, and with the iPhone 5 that controversy is about how easily the back of the black iPhone scratches.

As with any iPhone controversy someone decided to email an Apple executive to see how they respond. According to 9To5Mac an iPhone 5 user emailed Apple Senior Vice President of Marketing Phil Schiller to see what he and others can do about the scratches on the black iPhone 5.

Schiller’s response is the most obvious response to the question. He said “Any aluminum product may scratch or chip with use, exposing its natural silver color. That is normal.” 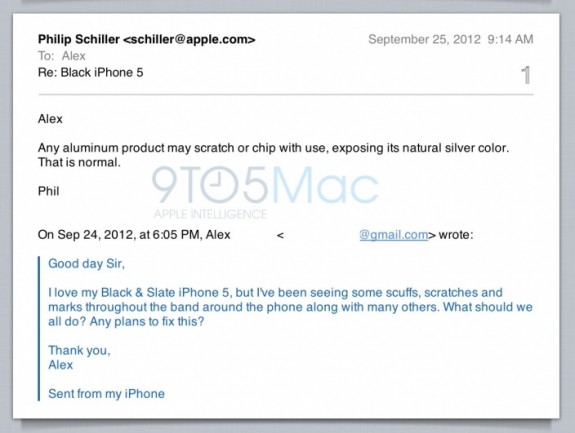 Aluminum isn’t exactly a hard metal, and it can scratch relatively easily, which shouldn’t surprise anyone. Previous Apple devices that used aluminum like the first iPhone and a few generations of the iPod nano also scratched easily. Being on the iPhone 5 doesn’t make the material any more durable.

he aluminum back of the iPhone 5 will scratch more easily, it won’t shatter when the users drops the phone, which caused many users to crack the back panel of the iPhone 4 and iPhone 4S.

Users who are afraid they’ll scratch their iPhone 5 can always use a case to protect their phone. There are clear case options for users who like the industrial design of the iPhone 5, and other cases that use their own design instead.

With such an easier fix this controversy seems a bit silly, especially when compared to a Maps app that can cause real issues, like getting users lost.