At WWDC 2013 today, Apple teased a new Mac Pro, a device that it says is a “machine unlike anything” they have ever made and confirming a number of high-end features that will be coming along with the Mac Pro including Dual AMD GPUs and ThunderBolt 2.

Apple was heavily rumored to have new hardware on hand at WWDC, its annual developer’s conference, the company pulled a bit of a surprise and showed off its new Mac Pro, a device that will be aimed at working professionals that need the highest-end performance from their personal computer. 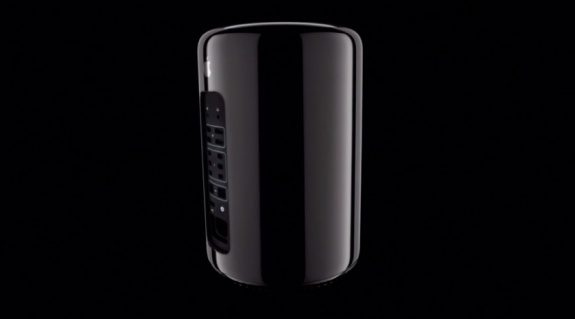 This is Apple’s new Mac Pro.

Those new features will be plentiful as the company announced that it will be coming with four USB 3 ports, six Thunderbolt ports, support for 4K displays, and dual AMD processing chips. Apple claims that those ports will light up for easy access.

It will come with 1,866MHz DDR3 memory with 60GBps performance, and a powerful 12-core Intel Xeon processor and more. The company did not offer a full reveal, likely saving that for later on this year. The device is, even on paper, a big upgrade over the previous version of the Mac Pro.

The company is so excited about the device that it caused Apple’s Phil Schiller to exclaim “Can’t innovate anymore my ass” in regards to its new product.

It’s unclear if the device will be coming with the new OS X Mavericks, but given that the software is scheduled to ship in the fall, it’s extremely likely that this will support Apple’s brand new and upcoming operating system. 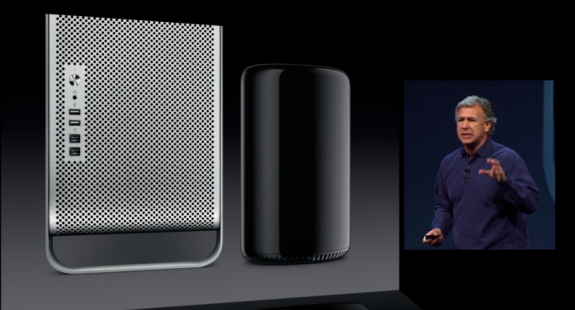 This is the new Mac Pro next to the old Mac Pro.

Apple was mum on a release date for the new Mac Pro but says that it will be coming at some point later this year and the company was quick to boast that the device was not only designed in the U.S. but will be assembled in the United States as well.