According to Apple Maps, my street, my entire neighborhood doesn’t exist.

When directing iPhone users to my house, Apple suggests driving through a yard, two fences and a treeline, instead of using the street and driveway that leads to my front door.

Apple Maps is no stranger to failures. As we found out, the new iOS 6 Maps app can’t be counted on to find an emergency room, but I was surprised to see that my street was missing – despite the ability to zoom in clearly enough to see my street and my car parked outside. 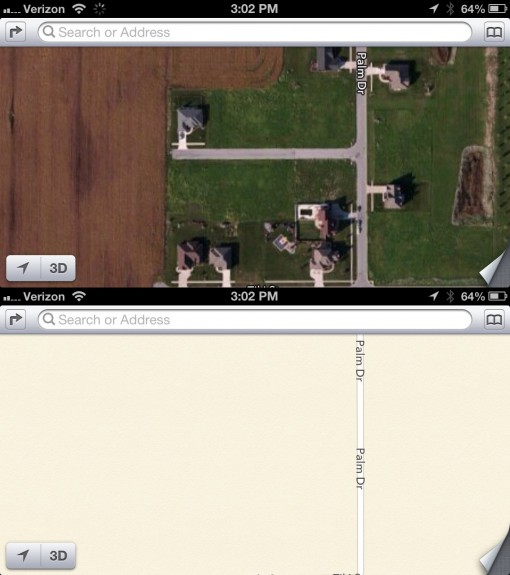 This nearby Apple Maps issue mirrors my missing street and neighborhood.

The image above shows the same issue at a nearby location, but does not share my address.

As it stands, my neighborhood is completely off Apple’s grid. There are no markings for a street on the standard mode, and in hybrid mode while houses and streets show up, Apple Maps doesn’t include them streets users can drive on, even though it recommends driving through yards..

Even though the streets in my neighborhood don’t show up on the maps, they do appear in search results. This creates an odd situation as Apple Maps tries to provide directions to my house, which if followed could make headlines of their own. 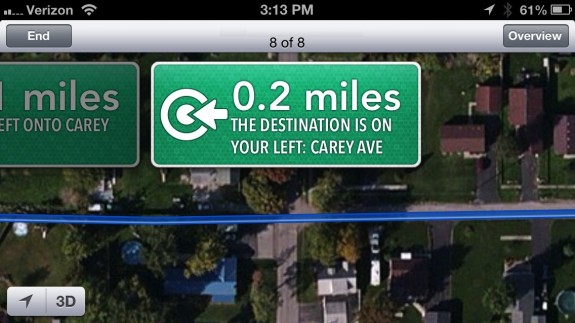 The street ends, but Apple Maps says to keep going.

When trying to find directions to my house on an iPhone using Apple Maps, users are told to turn into the driveway of a house one street over. And apparently to keep driving through trees and fences. On a second attempt, Apple Maps misses a street completely, directing the driver to go through several yards and fences before coming to a stop under a Japanese Cherry tree in my backyard.

Even though this neighborhood is almost a decade old, the streets don’t appear in many mapping solutions.

When I moved in my address was not part of Google Maps, which is a much bigger problem. As Google Likes to point out, Google Maps is more than a Map. While it’s difficult for a friend to visit for the first time using an iPhone for directions, without a listing in Google Maps it’s almost impossible to get pizza delivered since most online systems tie in to Google Maps.

Read: How to Report an Error in Apple Maps

I submitted a Google Maps correction, and several weeks later my street now appears in Google Maps ion the iPhone and in Android devices. I’ve already reported the error to Apple, but so far there are no streets in my neighborhood.

Now that Apple successfully put the Statue of Liberty back in place and is counting on 400,000 retail employees to improve Apple Maps they can make sure my home exists in Maps on iOS 6.