The new iPad launched on Friday March 16th, with lines and sell outs at many retailers.

The call, focused on the decision to start a stock dividend program for AAPL shareholders, but that didn’t prevent questions about upcoming products, prompting Tim Cook to tell Barclay’s, “We love to announce new products, just not during conference calls.” 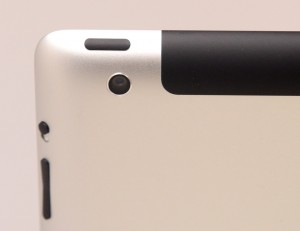 Apple’s stock had already jumped to record levels last week as Wall Street voiced approval for the new iPad, and it seems that consumers are voicing approval with their wallets, even though the new iPad does not look much different from the old iPad.

For buyers looking for their first tablet, the new iPad makes the most sense for the average user. As we said in our new iPad (3) review, “The iPad is the new iPod. It is, and deserves to be, the default choice for tablet shoppers.”

In our review, we cited the ecosystem of quality apps as a huge part of the appeal, which puts Android in a tough place to compete. It’s hard to draw developers with only 12 million Android tablets sold in 2011, and it’s hard to sell tablets without great tablet apps.

AAPL stock is up $10, or 1.71% ont he news of a record weekend and the new stock dividend program.