Apple to Steal from Microsoft, Include iWork in iOS 7 for Free?

Apple may be preparing to steal another page from Microsoft’s Windows Phone and Windows RT playbook by giving its iWork suite of productivity applications to iOS 7 users for free.

According to reports originating from iPhone-Ticker, Apple may include all of its iWork suite of applications like Keynote, Pages, and Numbers in iOS7. The publication was able to capture a screenshot from the page that iOS devices are first taken to when they open the iTunes App Store on their device for the first time in the iOS 7 Beta.

On the screen, Apple traditionally invites users to download free first-party applications that complete their iOS experience. Today this page includes applications like iTunes U. In the iOS 7 Beta 3 screenshot, the lineup of applications includes Numbers, Pages and Keynote — applications that users must purchase separately today at $9.99 each. 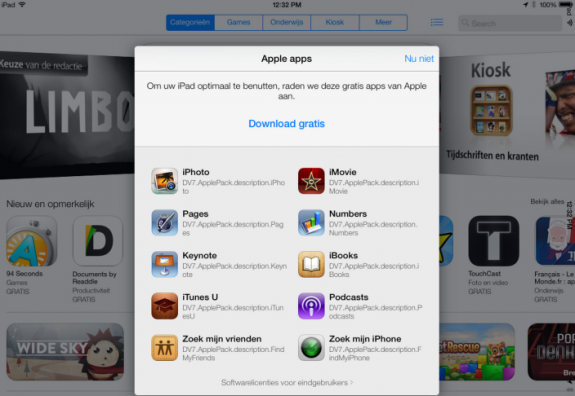 A screenshot of the welcome screen in iOS 7 Beta 3, captured by iPhone-Ticker.de

This leak comes just a month after Apple first announced that it would be making its iWork applications available to users in web browsers as part of iWork for iCloud sometime this fall. It’s unclear if this will be free or restricted to users who pay for more storage as a part of iCloud. All iCloud users are given 5GB of storage free.

If Apple offers iWork to iOS 7 users for free it could be seen as a move to keep Microsoft from outflanking iWork with its own Office Suite of applications. Today, Microsoft allows users to open and edit Microsoft Office documents from a web browser for free through its SkyDrive cloud storage service. The company includes a free version of Microsoft Office on Windows RT tablets and devices running the Windows Phone operating system.

Microsoft has also set its sights on revolutionizing the way users get Office on desktops and laptops. The company’s Office 365 service allows users to pay $9.99 a month to rent copies of Office that can be downloaded on up to 5 Macs and PCs, plus five mobile devices.

Microsoft recently debuted Office for iPhone. Currently, it requires the use of an Office 365 subscription. It has not made the suite available to iPad users.