Topeka Capital Markets analyst Brian White speculates that Apple will introduce its much rumored iTV this year in a 60-inch screen size and would retail anywhere between $1500 and $2500. White says that a 50- and 55-inch variants may also be made available, likely to offer lower entry-level price points. Previous reports of the iTV suggest that Apple may use its Siri technology to allow consumers to control the television set with their voice, but White says that Apple may be introducing an iRing as a way for users to control the television, similar to a remote control. 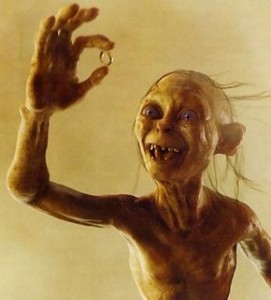 Apple’s iRing to rule your iTV; image: Lord of the Ring

The iRing would fit on a user’s finger and users can control the television set by pointing to the screen, according to White. It’s unclear if the television would have a built-in iSight or FaceTime camera to track motion.

Additionally, another accessory that Apple would introduce would be smaller portable displays. With the use of these described mini iTV displays, users can take these devices into any room and continue watching the television experience without having to sit in front of the iTV.

This is similar to what cable, satellite, and fiber TV service providers have been offering for paid subscribers of their content. Users can now remotely watch content on their iPad, tablets, and smartphones without having to be tied to their home set. The technology is also known as placeshifting technology as it allows users to be in a different location from where their TV is.

While White says that the mini iTV displays would be the same 9.7-inch size as Apple’s current full-size Retina Display iPad, it’s unclear if the mini iTV displays are just dumb panels or if Apple would incorporate the technology into the iPad via an app to deliver a truly connected experience between its iOS device and its new iTV endeavors.

And according to Yahoo!, the information that White is presenting is based on his visits to un-named Chinese and Taiwanese Apple component suppliers. An iTV set has been the subject of much speculation, denials, and perhaps false hope recently with Apple partner Foxconn having claimed it was prepping its factories to produce the iTV, but subsequently retracted its statement.

Apple currently offers a connected living room experience through its Apple TV set-top box, allowing users to stream movies and TV shows purchased or rented from the iTunes store, as well as stream content from third-party services like Hulu Plus and Netflix. An iTV would be a more complete experience than an Apple TV set top box as it would be fully integrated into an HDTV and offer a new user experience. In this case, White is describing the experience through the iRing controller.