Apple TV Concept Looks Like an iMac With iPad UI

A new Apple TV concept shows one option Apple has for its rumored device that combines the iMac and iPad.

The Apple TV concept from Martin Hajek for iCreate magazine shows a larger version of the iMac with an all-black design. The Apple TV itself looks almost identical to the new iMac design with black aluminum and different ports. Hajek’s concept includes four HDMI ports, and Ethernet port, Thunderbolt, on USB port and optical audio on the back.

The interface of Hajek’s concept is a blown-up iPad interface. The TV shows a number of apps such as HBO Go, Vimeo and YouTube in addition to the standard iOS apps like iTunes, FaceTime and Safari. 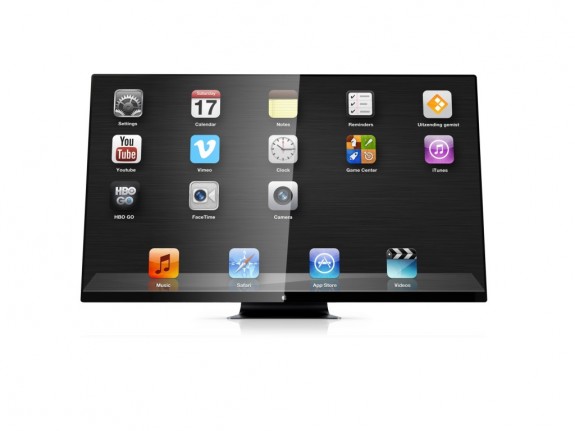 The collaborative concept includes a front-facing camera, which users can use for FaceTime or the camera app. The concept doesn’t show how users would interact with the TV, however.

The iPad interface is designed for touch, but on a 40-inch HDTV users would want to interact with it from the couch, which means touch isn’t really an option. The current Apple remote could theoretically interact with the TV, though it’s not clear why Apple would choose the iPad UI in that case. The UI for the current Apple TV is much more suited to a remote than the iPad UI.

Rumors of an HDTV from Apple started circulating a long time ago, with some reports claiming that Apple will use Siri as the main way of interacting with the TV. Some rumors claim Apple is working with content providers to make the TV a reality. While rumors circulate, Tim Cook will only say that TV is something Apple is looking into.

Recently Apple TV rumors have taken a backseat to the rumored iWatch, which could come out sometime this year. That rumored release could push the mythical TV into next year, according to some rumors.