The latest Apple TV update includes a new version of the Hulu Plus app that’s easier to use than the previous version.

The new Hulu Plus for Apple TV uses a clean design that blends the UI of Hulu Plus on other devices and the Apple TV UI. The app adds a navigation bar to the top of the screen so users can easily find what they’re looking for, assuming they’re looking for TV, movies, latin content, kids content, search, setting or their queue.

Below the navigation bar is the collection of featured shows, movies and trailers. The collection uses a Cover Flow-like layout, making it easy to see more than one item in the rotating carousel. 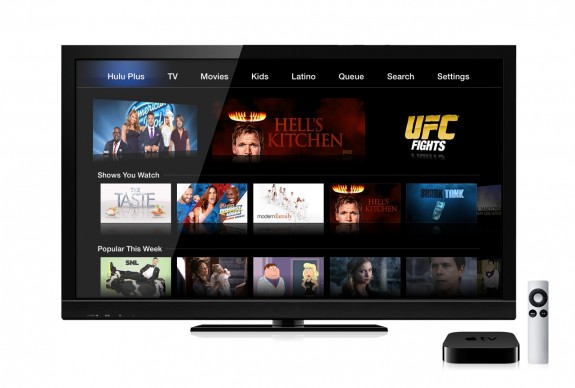 The rest of the app also uses a Cover Flow-like design for lists like “Shows You Watch” and “Popular This Week.”

Perhaps the most important change is how much easier it is to start watching shows or movies. In the new app to play the latest version of a show whether in the queue or in search, users can simply press the play button. In the previous version of app it took about a half-dozen presses of the select button just to watch the latest episode of a show in the queue.

The new app also adds caption functionality. To turn on captions, users have to press the select button until the “Subtitles and Audio” option appears. The option to turn on subtitles will help users  who are hard of hearing, or those who like to watch foreign language shows and movies on Hulu Plus.

To access Hulu Plus users still have the pay $7.99. The service gives users access to many shows from network stations the day after they air on TV. The service also includes a number of shows from the U.K. that aren’t available in the U.S. otherwise such as Misfits and Skins as well as a collection of subtitled anime shortly after it airs in Japan.