Apple has officially announced the iPhone 6 and the iPhone 6 Plus, which come in 4.7- and 5.5-inch screen sizes, respectively, as well as an all-new design for the first time in two years.

The iPhone 6 has been the subject of numerous rumors and leaks over the last few months, but all those come to an end, now, as the device has been shown to the public by the Cupertino-based company.

The overall design of the iPhone 6 is pretty much exactly what all the rumors have been saying. It comes with curved edges, different volume buttons, the power button on the right side and a protruding camera lens.

However, perhaps the biggest change in the design is just how thin the iPhone 6 is. The 4.7-inch model is a mere 6.9mm thin, while the iPhone 6 Plus is only 7.1mm thin. This is compared to the 7.6mm thinness of the iPhone 5s. In other words, these new phones are thin.

While the user interface on the 4.7-inch iPhone 6 remains largely the same of previous models, the iPhone 6 Plus practically has an all-new UI that’s reminiscent of the iPad, with two-paned windows in some apps and the ability to even use the home screen horizontally, which has never been done on an iPhone before. There’s even independent cut, copy and paste keys on the iPhone 6 Plus keyboard, which is something we could see in iOS 8 for the iPad.

And if you’re wondering how current iOS apps will work with the larger displays on the iPhone 6, Apple says that they’ll simply just scale up for now, but we reckon that app developers will update their apps to work fully with the new higher resolutions.

Both models also have a new feature called “readability,” which allows you to double-touch the Home button and the entire screen slides down so that you can reach the top buttons. This is perhaps the “one-handed mode” that we’ve been hearing about through rumors.

The iPhone 6 is a huge improvement over the iPhone 5s, sporting a larger screen (4.7- and 5.5-inches compared to the iPhone 5s’s 4-inch screen), as well as a faster processor on the inside. The iPhone 6 is using Apple’s new A8 processor, and while Apple didn’t say what speed it’s clocked at, it’s safe to assume that it offers faster speeds than the iPhone 5s. Apple says that the A8 offers 20% faster performance with 50% faster graphics.

The M7 motion processor that was first introduced in the iPhone 5s is also getting an update, only this time Apple is naming it the M8 (not to be confused with the HTC One M8). The new chip can tell the difference between cycling and running, and it can also calculate distance and elevation. It does this with the help from a built-in barometer, which uses air pressure to measure relative elevation.

Also new on the iPhone 6 is a better camera with the usual improvements that we’ve seen from year to year with the iPhone, including better image quality and improved low-light image capturing. However, the camera has a way better sensor, and it can focus twice as fast as the iPhone 5s can. 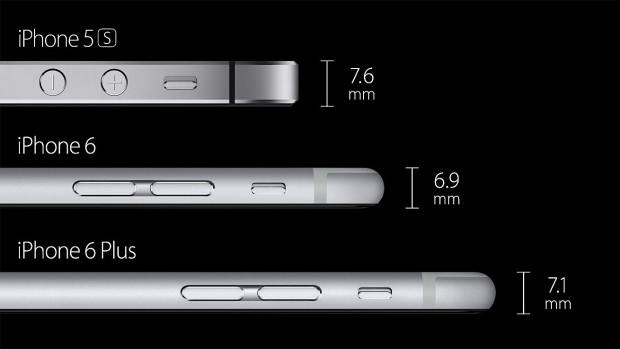 Not only are the displays bigger this time around, but they’re essentially next-generation Retina displays. Apple is calling it Retina Display HD and it comes with an ultra-thin backlight, photo-aligned IPS liquid crystal, improved polarizer, and ion-strengthened glass. However, no mention of sapphire glass, but it seems the company at least used more-rugged glass anyway.

The iPhone 6 and iPhone 6 Plus will launch on September 19, with pre-orders starting on the 12th, which is the first time in a while that Apple is doing pre-orders for the iPhone.

Color option are as usual, with space gray, silver and gold being the three choices. And finally, the iPhone now comes in a 128GB storage flavor, but only on the iPhone 6 Plus. Choose wisely!