Most notably, the new Siri will have options to use the voice of a female or male and speak in the user’s native language. It’s clear that Apple has made some alterations to the Siri speech pattern so that it sounds a bit more natural than it does today, as well.

Users will have more opportunities to appreciate the change in voice thanks to integration from Wikipedia and Twitter. The updated version will be able to read and write tweets and directly relay information to users found on Wikipedia. 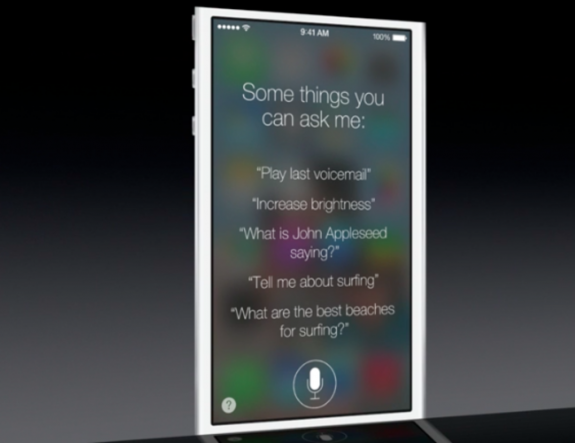 The new Siri included in iOS 7, courtesy of The Verge.

Apple has also moved to integrate Bing into Siri as well, further reducing its dependence on Google Search. Until now Siri had relied on Google and Wolfram Alpha’s search results to deliver answers to users, based on the type of information they were asking for.

Apple has already removed YouTube from its lineup of applications that ship on iOS devices and opted to create its own mapping solution instead of depending on Google. While the removal of YouTube didn’t result in much backlash, the replacement of Google Maps with Apple Maps left many users running for other map solutions due to the relative immaturity of the app.

It remains to be seen how the switch in search engines might effect siri.

Apple will introduce a large number of changes to the visual styling of Siri. Just as it has with the rest of applications on iOS 7, Apple has ditched the synthesizer like user interface of the two previous incarnations of Siri in favor of an interface that’s flatter and has less elements. When activated, Siri will now act as a sort of visual overlay on the user’s screen, blurring out whatever was onscreen previously and overlaying a flat white microphone icon and text overtop a blurred background.

Finally, users will be able to ask Siri to change the settings on their device. For example uttering “Siri, increase brightness” will increase the brightness of the iPad or iPhone.

Many users will find the interface familiar if they’ve had any experience using Android devices.

At its WWDC conference Apple said that it would bring the updated Siri inside iOS 7 to users of the iPhone 4 and above, iPad 2 and above and 5th generation iPod Touch sometime this year.