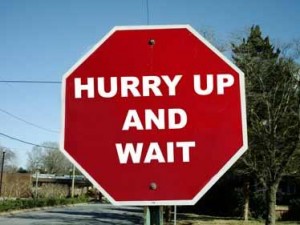 Whew! It’s crazy out there for all of the folks eager to try out all that Apple is rolling out today. Between iOS5, OSX 10.7.2, iCloud, and a host of other updates, new Apps, etc… Apple’s servers are being pounded making the process less than smooth.

In addition various folks are reporting that they are having trouble on a number of fronts. Some are experiencing difficulties after the iOS download completes and then seeing the install fail. Some are experiencing problems with the MobileMe to iCloud transition. Some are reporting that the iOS update ate some data and photos along the way. Some are just giving up and waiting until another day. Keep in mind though that Friday will see quite a few folks jumping into the fray as new iPhone 4Ss get delivered or bought in stores.

Here’s a word or two about iCloud. There is still some confusion out there about what to do if you have multiple Apple IDs, or if you have a MobileMe address and a separate Apple ID. This affects single users as well as families who have one ID for making purchases. I’ve done some reading and to say that it is confusing is well, about right.

Near as I can tell it looks like you can migrate and old MobileMe address to iCloud. If you don’t have one you’ll be asked to create one. This is for the basic iCloud services (syncing mail, contacts, pictures, etc….). It then looks like you’ll be able to attach an iTunes Store account to that for syncing music, etc… You might want to check out this Apple user forum for some reading on this. But keep in mind this was all going on before things went live today.

Given the heavy bandwidth loads, lack of clarity about iCloud, and other issues I’m seeing, this might just be one of those times to set back and let the dust settle. Or at least let the downloads ease up a bit. But you might we waiting a bit.

If fact, I’d recommend waiting on setting up iCloud until there is some more clarity if you have multiple IDs.