Apple’s earbuds have never been amazing by any stretch, but new patents show the company wants to at least make them look a lot nicer.

According to AppleInsider the patents will make earbuds look like a single piece of plastic when they are, in fact, made of multiple pieces. A process called ultrasonic binding will connect the earbuds. The process would result in a pair of headphones that appear to have “a seamless unibody structure.” 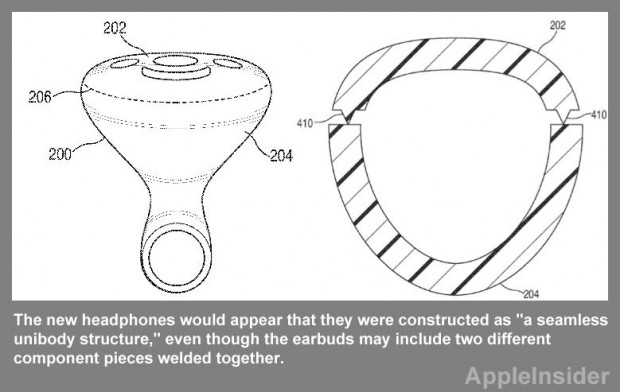 With the new process Apple can create earbuds that don’t look like their made of several pieces that end up looking “aesthetically displeasing.”

The unibody design still needs holes to allow the music to get through, and the second patent describes curved pieces of plastic with small holes for letting sound out. To make sure those small holes are smooth, the patent described a “deburring” tool that will use an abrasive material to smooth and polish both sides of the plastic pieces.

The result of the “deburring” is a smooth, curved piece of plastic for the surface of the “unibody” earbuds.

We don’t know when Apple might release these new “unibody” earbuds. There are rumors of a unibody design for the iPhone 5, however. We wouldn’t expect these earbuds to ship with the iPhone 5, but they show that Apple is intent on bringing Unibody design to more products.

Hopefully with the new design Apple will also try to make the earbuds more comfortable to wear for more than a few minutes. We would also appreciate better sound quality, but that seems far less likely.