We thought we would never see the existence of this thing, but Apple has officially announced and unveiled the Apple Watch during its iPhone 6 event today.

The company has taken the “i” prefix out of the name, but that doesn’t mean it loses its Apple value. The device’s design is very similar to that of Apple’s other iOS products, and it even runs a modified version of iOS.

However, Apple CEO Tim Cook says that the company didn’t just shrink down the iPhone’s user interface and strap it to your wrist. Instead, the touchscreen UI is much different on the Watch than on an iPhone.

For example, instead of using pinch-to-zoom on the tiny touchscreen on the Watch, you use a small dial that you turn in order to zoom in and out while viewing maps. Pressing the dial, which Apple calls the “digital crown,” will take you back to the home screen.

The Apple Watch is quite the fitness device, as it has a myriad of sensors on the bottom to record your heart rate and other vitals, and it borrows the GPS signal from your iPhone for running or cycling apps to use. It looks like it’ll track your fitness activities better than most wearable devices can, but we’ll have to test it out first before we make such claims. 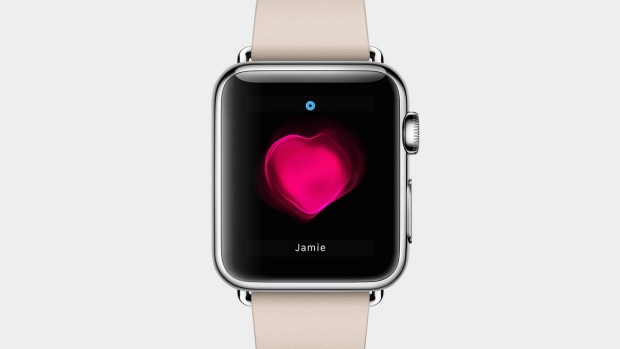 You can also use it to control your Apple TV or use it as a viewfinder for the iPhone camera.

The device uses a MagSafe wireless charger that uses inductive charging, so no need to physically plug something in, which is really nice, especially for a watch. 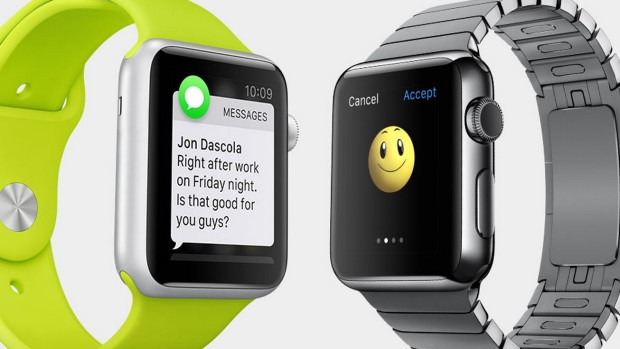 And of course, let’s not forget about all the different watchfaces that Apple made for this thing. The company includes a default selection to choose from, but we imagine that third-party developers will be able to get in on the action.

There are also six different straps that Apple has made for the Watch, with a soft, quilted leather strap being an option, as well as a “supple” leather strap with a clasp, and even a stainless steel strap for the classy folks.

Of course, the Watch requires an iPhone to function, so you’ll have to be iPhone user in the first place before you can buy and use the Watch, but we’d imagine that would be the case anyway for many users. Plus, it’ll work with the iPhone 5s and iPhone 5c, as well as the iPhone 5.

The Apple Watch will start at a steep $349 and will be available at some point in early 2015, but no exact release date has been announced thus far. Also, no word on battery life or connectivity options, which is a bit odd, but we’re guessing we’ll hear about that soon enough, possibly at Apple’s iPad event next month.