According to one local repair shop in the San Francisco Bay Area, the most common accidental damage for a smartphone is being exposed to water, and the most common water damage is a user accidentally dropping their phones in the toilet. Barring sanitary issues, a new Apple patent for a waterproof display could help your iPhone survive a slip of the hands and into the toilet or the occasional tipped over coffee mug in the morning.

The patent filing suggests that Apple could introduce a water resistant barrier so that when it is exposed to liquids, the liquid wouldn’t be able to permeate through the phone and into the circuitry internally to cause any damages.

Given the popularity of consumer-grade, non-rugged waterproof smartphones on the market today–like the Samsung Galaxy S4 Active on AT&T Mobility and the Sony Xperia Z on T-Mobile US–a waterproof iPhone could help Apple reach an even broader audience and help its current customers. It would also allow the iPhone to be used next to a pool, in the tub, or even at the beach without worries of water damage, and users wouldn’t need a bulky case like a waterproof Otterbox case, a Lifeproof case, or an Incipio Atlas to help shield the phone from water.

Another idea was to apply a nano-coating to a smartphone to make it waterproof, such as the idea implemented by Liquipel.

In Apple’s patent, the way that this moisture barrier works is that there would be multiple layers that would seal the display from water damage. Though this wouldn’t create a waterproof smartphone, it would help prevent the iPhone from being damaged as a result of water spilled onto the phone’s display slowly seeping into the casing. According to Laptop Mag, here’s how the different layers would work to help prevent water from seeping into the phone from the display:

“As the moisture barrier may be substantially impermeable to fluids such as water, it may prevent moister from penetrating one or more of the layers of the display,” Apple wrote in i its patent filing. “This may substantially prevent one or more layers of the display from warping or otherwise changing dimension or shape due to moisture changes such as increases or decreases in humidity.” 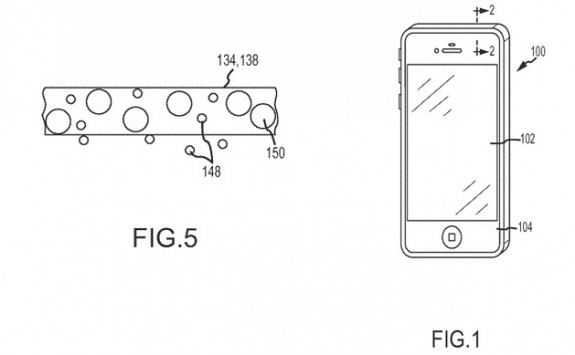 Though Apple may be exploring with different ideas and innovations, many of the patent applications and filings do not make it to a commercialized product so it’s still unclear if we may see a water resistant iPhone 6 in the future. As Apple’s competitors broaden its smartphone features with new improvements, Apple will likely have to match some of those improvements with its own. New features introduced on rival phones include better cameras, waterproofing, larger displays, curved screens, and potentially even flexible displays on future models.

If Apple does implement this idea into a future iPhone, it could help the company extend its customer satisfaction lead. In the earlier days of the iPhone, though users were largely satisfied with iOS and Apple as a company, there were a few who felt that Apple’s phones were too sensitive to water damage. Apple had placed a liquid indicator strip inside its phone that would show a positive reading if the phone was at all exposed to water. If the phone registered a positive reading, Apple would void the warranty and could deny any warranty repairs, leading to a lawsuit.