Apple’s App Store is close to another milestone and the company has unfurled a new counter to mark the occasion. If you head over to Apple’s website, you’ll be greeted with a counter that is counting down to the 25 billion apps downloaded mark. Yes, 25 billion. Right now, the counter sits at a little over 24 billion but it shouldn’t be long before it reaches the 25 billion mark.

Apple is offering a $10,000 gift card for the App Store to the person who downloads the 25 billionth app. All you have to do to enter is fire up the App Store on one of your devices and get downloading. 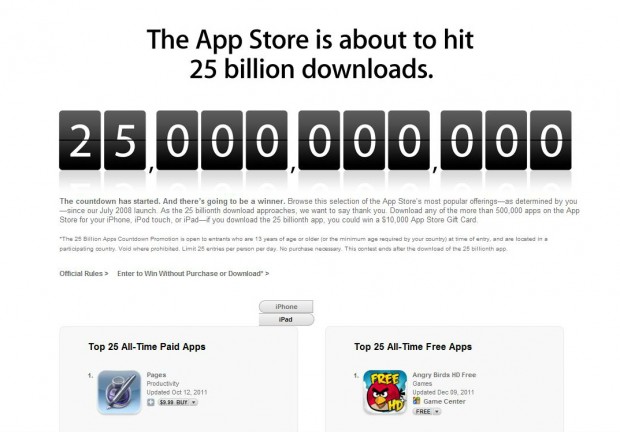 Needless to say, it looks like the marketplace has seen quite a bit of activity over the last couple of months. Not surprisingly, considering the fact that the company sold a staggering 37 million iPhones during the 98 days of the first quarter of 2012.

During that time, it also sold 109 iPads a minute for a grand total of 15.4 iPads sold during the quarter.

The App Store was first introduced in 2008 alongside the iPhone 3G and since then, it has been joined by a dedicated Mac App Store which Apple launched during October of 2010.

So, if you’re itching to spend ten grand on the App Store, you’ll probably want to start downloading applications like mad once the counter nears the 25 billion mark.