Apple's iBooks is a Mess

At the end of Noel Coward’s comedy Blithe Spirit, the spirits start upsetting the household belongings like a poltergeist on steroids. Doors open and close, knick knacks fly around, and books fly off shelves crashing into messy piles all over the floor. With the new changes for iBooks, Apple has become a digital poltergeist scattering users’ digital book collections willy nilly and requiring a great deal of cleanup. And, perhaps an exorcism to get things back in order. Apple has reached into digital libraries and mixed things up in ways that would drive most librarians into retirement, while considering book burning as a second career. 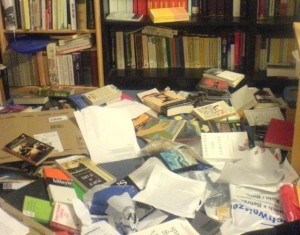 With the release of OSX 10.9, Mavericks, Apple created a separate iBooks application for the desktop/laptop to pair up with a new version for iOS 7. That sounds like a great idea in theory. But, alas, like other examples of “new” we’ve seen from Apple, this is a step back. Perhaps it follows the two-step that Apple seems to enjoy with software of late – taking a step back, before moving forward again. If so this one would make any dancer look for a new partner. This removal of functionality has happened with Final Cut and the iWork suite of Applications. It also happened when Apple decided to remove podcasts from iTunes. In each instance Apple riled users up so much it had to issue an apology for its “forward-thinking” and reverse course in others. I don’t doubt there is some master plan for creating some new “magical” experience down the road that requires a re-tooling. But in the process Apple is making its users struggle through a denser obstacle of briars and brambles than any prince did trying to reach Sleeping Beauty. Bluntly, Apple’s iBooks is a mess.

My suspicion is that Apple has put its focus on the commerce side and once again is having difficulty with its Cloud service, iCloud. Books purchased through Apple’s iBooks store are available across devices as they always have been. But the difficulty comes in with users who have used iBooks to manage their PDF collections. Those collections can be DRM free books, manuals, scanned documents, or in my case play scripts that I use in rehearsal. iBooks used to be contained within iTunes, and just like with other digital content, users could add their own metadata to PDF files if they choose to. Prior to this latest version these documents would sync via iTunes across devices.

If a user received a PDF attachment via email and chose to open it in iBooks, that content would sync via iCloud to a desktop or other iOS device with ease, provided the user had chosen to let this syncing occur. Now, it appears that this simple and “it just works” functionality is gone. Not only is the functionality AWOL, Apple hasn’t seen fit to clarify it’s own words about how syncing works with non-iBooks purchased content.

The first sentence seems clear. If you’re not using Mavericks do this. If you are do that. Note that once the steps are enumerated, everything relates to iTunes syncing and not the Mavericks version of iBooks.

And this is from Apple’s iBooks page describing the product: 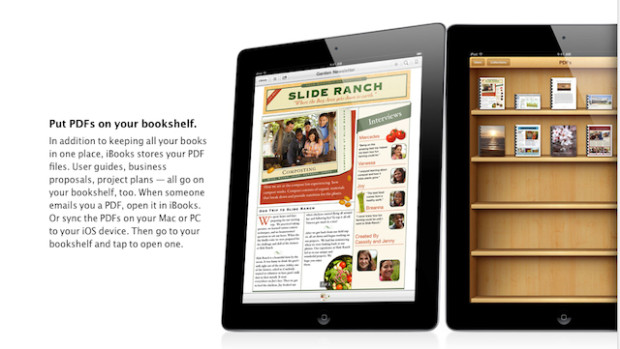 Read the next-to-last sentence in the description. It’s not as simple as it is made out to be.

I’ve recently been through my annual ritual of purchasing new iOS devices (iPhone 5s, iPad Air, iPad mini with Retina Display) and I also updated my Mac Pro and iMac up to Mavericks, which included the new iBooks. In previous editions of this ritual, the PDFs I had stored in iTunes would have been available on all of the devices. Call me crazy, but reading Apple’s own materials, I expected that once my Collection that contained PDFs had been moved to iBooks, similar behavior would occur. The word Collection is in bold and italicized for a reason. Because iBooks in Mavericks and the new version 3.2, you are given  options to view Books, Purchased Books, or PDFs. Each labeled a Collection. The same was true in previous versions. 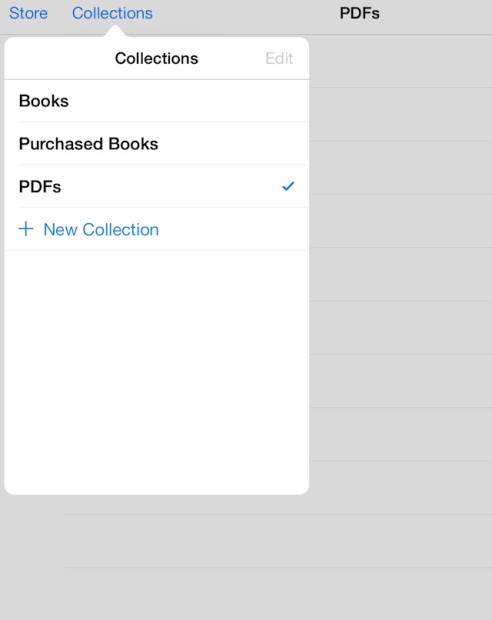 Once again, Apple’s own words from the iBooks product description in iTunes:

If your PDF collection is in a “personal collection” it isn’t going to sync across devices without some manual intervention by you.  Your PDFs might have been in a collection before that did the magic iCloud sync to a new device, but that is no longer. There is a way to make sure PDFs sync across collections again. That method is so pre-historic in today’s digital and Cloud age that it harkens back to a time when monks would manually copy texts to make copies available. By candlelight. With quill and ink.

If you manually add your PDFs to each device in iBooks, those collections will sync across your devices. Note, however, that if you delete a PDF from a collection on one device, it will still remain on the other devices. For my script collection I’ve had to resort to a laborious process of adding those to my iDevice collections individually. Typically I email them to myself and then add them to iBooks as I need them on each device. No longer can I feel like I have them at my disposal when I need them, without prior thought and organization.

Apple could have helped out with a little forewarning or after announcement guidance. But, Apple’s own documentation on iBooks and what it does and doesn’t do is useless and confused. Here’s another link that says all of your collections will be synced across devices.

There is some good reading in the Apple Support forums on these “new” changes to iBooks, and how users are affected and how many of them have coped and found work arounds. This thread titled, Every Single Problem with iBooks for Mac is full of good information. I didn’t realize just how many folks used iBooks to manage PDF collections until I started looking into this issue. There is also an excellent document from macography.net that describes what is going on with PDFs and syncing. The short summation at the end of that document is this:

“In one sentence, iBooks Collections synchronize the organization and bookmarks of your iBooks across devices, it does not synchronize documents – with the exception of books purchased on the iBooks store.”

As I mentioned earlier, users of Apple’s software have become accustomed to having features removed from products as they supposedly advance. Apple is becoming as well known on the software side as it was on the hardware side of things by leaving features in the dust when it is ready to move on. So be it. We can all look for other solutions. And there are plenty of other solutions for managing PDFs on iOS and Mavericks.

But adding these non-announced changes to software and then letting users discover and complain about it is becoming a disturbing trend. If it hadn’t happened so often recently, I would say it is decidedly un-Apple like. I’m not sure how that equation is balanced in the halls of Cupertino. Smart people have to know a backlash is coming, so why not get out front, if not in a product announcement, then in the follow up to one. Certainly, it is should be no great effort to change language on product support and announcement pages to be consistent with the experience users will discover on their own. Or does Apple really not know how its customers use its software? I find that hard to believe.