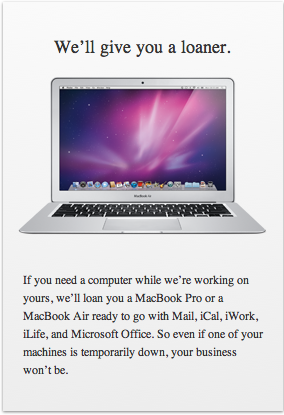 Apple’s officially launched Joint Venture, a concierge service for businesses. The Joint Venutre service is $499 per user, which might sound steep for a lot of people, but there appears to be sufficient value for busy professionals. Apple’s Joint Venture also has one important benefit that could be worth the $499 price tag alone.

Joint Venture is essentially a 1to1 membership (which is offered to consumers) on steroids. Joint Venture offers priority service at Apple’s Genius Bar, which means subscribers will get more love from the Apple Geniuses than those Mac users without the $499 to spend. Membership also includes ongoing training, which can be especially important for OSX newbies.

The $499 Joint Venture service must be purchased at the same time as a new Mac. The fee includes an initial data transfer from an old Mac or PC and ongoing tuneups. Apple Geniuses will install new software or hardware as needed. A priority callback service will be provided so Geniuses can attempt to solve your problems remotely.

Perhaps the most important benefit of the service is the loaner program. Apple will loan Joint Venture customers a Mac in case the issue can’t be solved by a Genius and your Mac needs to be checked in for repair. This is perhaps the killer feature of the service, especially for those who simply can’t go a day, much less a week or more, without a computer. The loaners will be MacBook Airs and MacBook Pros pre-loaded with Microsoft Office, iWork and the rest of Apple’s bundled software.

After a Mac and Joint Venture is purchased, you have 14 days to register your other Apple gear. Unfortunately, all of that gear must also have been purchased from Apple.com or an Apple store. The only exception is the iPhone, which can be purchased from Apple partners.