Apple's Latest Hire Suggests Next Big Thing is in TV

Apple’s latest hire is CableLabs executive Jean-François Mulé, suggesting that the Cupertino, California iPhone-maker may be focusing on the living room for its latest game changer. Apple had changed the smartphone industry in 2007 when it had introduced the first aluminum-clad iPhone, ushering in a simple UI, capacitive touchscreen, and later featuring third-party apps. The company later revolutionized the tablet industry and now it looks like Apple could potentially change television with Mulé. The company has not announced what Mulé’s role would be at Apple, but a report on Multichannel News suggests that the executive will be working on “something big.”

Apple currently offers a small set-top box called the Apple TV where users can run a limited number of third-party apps, play purchased and rented movies and TV shows from iTunes, and mirror content on their iPhone, iPad, and Mac to the television. Apple has been rumored to be developing its own integrated HDTV unit called iTV, but so far the company has made no such announcement around that product. 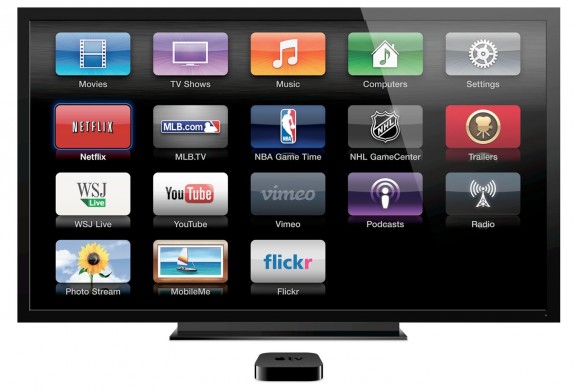 It’s unclear if Mulé will be involved in creating the next evolution of the Apple TV set-top box or if he will be involved on the more ambitious plan to build an Apple-branded TV. With TV, Apple could help to revolutionize the menu system and make cable boxes simpler for users to navigate. Voice control, motion gestures, and integration with iOS are among the rumored features that could potentially make it to the future of Apple’s involvement of television.

In addition to TV, Apple is also rumored to be spending more resources into the wearables market, hiring key fitness and fashion industry insiders speculated to be involved in its unannounced iWatch smartwatch. Apple is also exploring the car market with features such as Siri Hands Free and iOS 7 in the Car.

These endeavors could help Apple grow its user base as the smartphone market is becoming more saturated in a competitive space where growth is slowing down.