I picked up a Magic Mouse from Apple primarily to check out the new multi-touch features, and also to continue my quest of finding a mouse I like. I’ve tried a lot of them, and all basically leave me wanting for some reason or the other.

The Magic Mouse’s predecessor, The Mighty Mouse, is certainly not one of the favorite rodents I’ve held in my hand. The ball/button gums up more than it should, and that just isn’t a workable solution. The Magic Mouse seeks to eliminate that with its button-less design, and though I’ve only been working with it over a weekend, that aspect of the Magic Mouse is a plus. It is easier and more consistent to perform a right click on the Magic Mouse than it is on the Mighty Mouse. 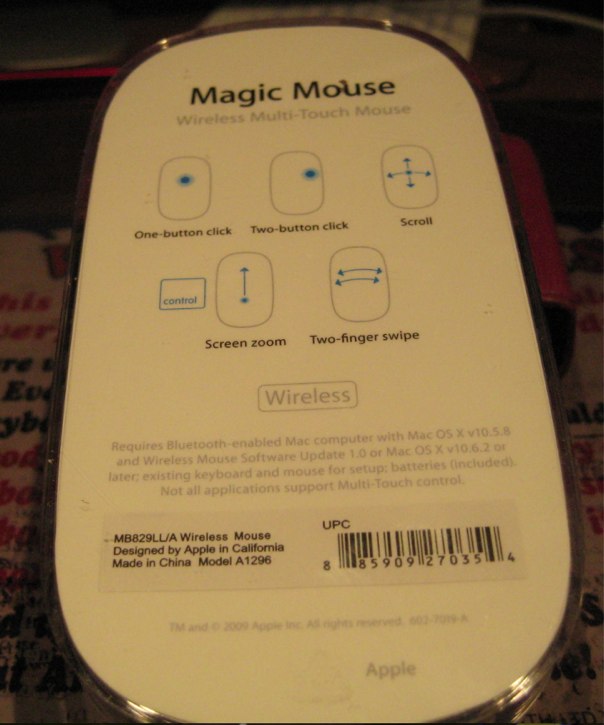 The multi-touch features basically offer some of the same functionality that you get on Apple’s later MacBook trackpads. You can zoom, (with a key combination) you can scroll, and you can do a two-finger swipe for navigation. How well does that work? As well as can be expected is my answer to that question. It isn’t a great, nor effortless experience, as it requires some retraining. Scrolling up or down by moving your finger up and down the mouse works very well. Moving across the mouse surface horizontally also works well if you need to go side to side. The two-finger navigation is a bit tricky, but it does allow you to navigate through a series of pictures or files, or back and forth within a tab in a browser. Too bad there is no way to go between tabs in a browser though. The one thing that the Magic Mouse scrolling has shown me is just how lousy scrolling in Google Reader is. I used to think that it was a mouse issue before I picked up this mouse. I would resort to the short cut keys instead. But, it looks like it is a Google Reader issue that causes the herky-jerky scrolling and it isn’t a fault of the mouse. Scrolling through other web pages is a breeze and I find I actually prefer it with the Magic Mouse than with scroll wheels, buttons, etc…. 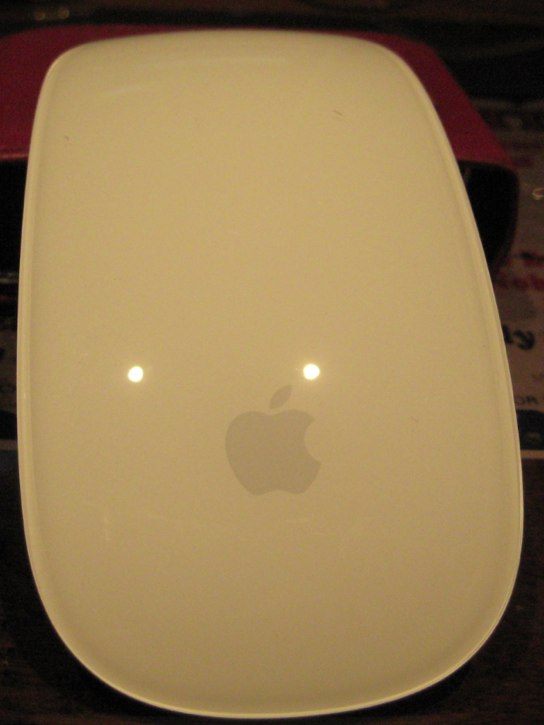 The biggest difference with the Mighty Mouse is how you hold it in your hand, at least in my case. In essence I have very good success if I just grab it with my finger tips instead of gripping any portion of the device. This is somewhat different than how I would grip its predecessor. The lighter I hold it in my hand, the easier it is to operate. At least in my testing so far.

What is curious though is that the design of the bottom of the mouse causes it to make a much louder scraping sound when it is moved around on a surface. Moving a mouse is a friction filled exercise in any case, but I’m noticing that regardless of the surface (desktop, multiple mouse pads) the Magic Mouse makes a louder scraping noise. That may not be an issue to anyone but me, but I find it disconcerting and it does jar the hand eye coordination factor a bit in my usage. Who would have thought that the sound of a mouse would be important, but I find it disconcerting.

The Magic Mouse is small but it feels a bit heavier and also more metal-like to the touch. I think that is a good thing. As I grip it with my fingers an mouse around, I find myself not wandering off the edge of a mouse pad as much. Is that due to the size, the design, or he weight? I’m not sure.

So, after a weekend of testing, I’d say Apple’s new Magic Mouse isn’t really all that Magic. It’s another mouse that offers some multi-touch capability, but nothing that I think will change how humans use a mouse and a computer. That said, a mouse is a very personal accessory. I’m guessing that you won’t be able to really tell if this is for you until you try it out. Only problem is that it will take longer than your usual trip to the Apple Store to find out if it works for you or not.