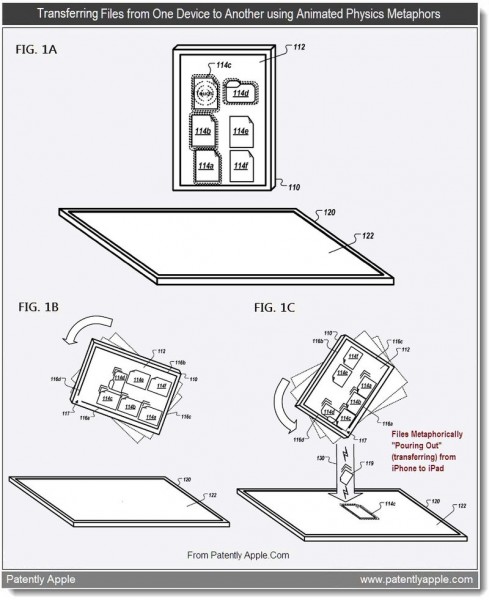 A new patent uncovered shows that Apple has its eyes on HP’s webOS platform’s ‘Touch to Share’ feature where users can begin browsing on the TouchPad tablet and tap their Pre 3 smartphone to the tablet to share the webpage to the phone and resume browsing on their phone while away. While the Touch to Share feature of webOS relies on HP’s Touchstone technology, which uses magnets, it’s still unclear how Apple will implement the sharing features on iOS, though Apple could potentially utilize near field communications, or NFC, technology to handle the sharing aspect.

While the premise of Apple’s sharing idea found within the patent is similar to webOS’s Touch to Share, there are some differences in the user experience. Apple will be using visuals, sounds, and physics to enhance the user experience while sharing files and content between two devices.

The patent says that a user could initiate the transfer or sharing with a simple gesture or motion. After that, a user, could for example, ‘pour’ the content from one device to the next where the motion sensor could react to determine how fast a file is poured. There will be visual elements and sound effects between the two devices to show what is being poured.

Another metaphor is the vacuuming action. If a user places an iPhone on top of the iPad, the user can then move the iPhone around and suck up the files from the iPad.

While Apple has patented these touch to share user experiences, it’s unclear if these applications will become commercialize. Also, for a company that focuses on simplicity, adding all these visual and audio effects to the simple touch to share action may seem to deviate from Apple’s core design goals.