A newly unearthed patent application filed by Apple could reveal the company’s plans for its much rumored iTV and endeavors in the living room space. It was believed that with the iTV, Apple would more heavily dominate the living room than with with its current diminutive Apple TV set top box by bringing the Apple UI and experience to a full HDTV set for the living room. However, such a solution would be bulky, costly, and may not appeal to enough consumers who may not be ready to replace their existing large panels at home. Instead, this patent application calls for the use of smart sensors, a projector, and a completely wire-free experience that may make Apple’s living room expansion more welcoming.

Essentially, according to Patently Apple,  the Apple box would be a mobile computer that would come packed with sensors such as an ambient light sensor, depth sensor, and accelerometer. With these sensors, once the box is placed down, it could detect how large of an image to project and adjust the image for any distortions. The projector would also correct for color balance, brightness, and orientation. 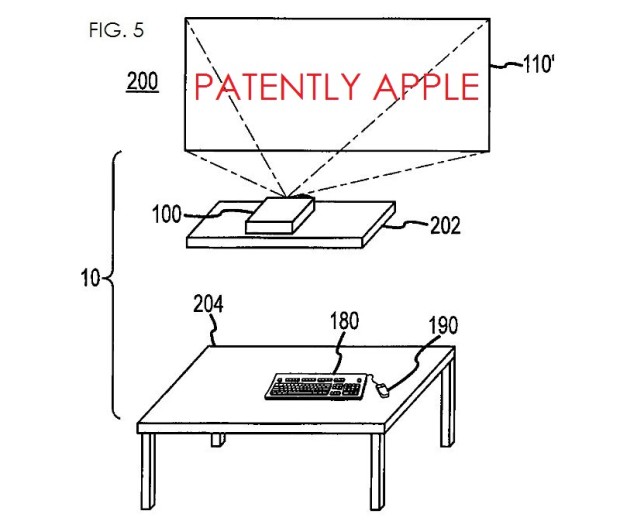 Additionally, like the rumors of a wirelessly recharging iWatch, we’re also hearing that Apple will be working on an inductive wireless charging solution so that the box could essentially be free of messy wires, making its placement on a coffee table more appealing.

With the recent iWatch report, we’re hearing that Apple would be relying on a magnetic charging experience that differs from current wireless charging standards today. Rather than requiring iWatch wearers to take off their watches at night to recharge, a base station could automatically recharge the watch, even while it is still being worn on the wrist, if the iWatch is within about 1 meter of the recharging station. Such a solution could also be employed for the new iTV projector, making the device mobile and free of wires.

Additionally, users can also connect a wireless keyboard and mouse or wireless trackpad to this living room PC and control it this way. Apple recently purchased the motion sensing company that was responsible for Microsoft’s first Xbox Kinect technology, and potentially gestures and motion could make its way to the living room PC.