While Google’s digital mobile Wallet app is not gaining traction in the U.S., Apple’s Passbook is quickly becoming the darling of Major League Baseball (MLB) fans. According to a MarketWatch report, 12 percent of e-ticket buyers chose to use the Passbook option when given the chance. This translates to 1,500 buyers of e-tickets since Passbook has been available to the public, which is a pretty fast adoption rate given that iOS 6 has been available as a consumer download for less than a month now.

The app, which is pre-loaded and part of iOS 6, allows users to load reward cards, mobile payment cards, gift cards, movie tickets, flight boarding passes, and MLB game tickets so that they don’t have to carry around paper tickets. And rather than incorporating and forcing users and merchants into new technologies, like near field communications (NFC) chips and radios, Passbook doesn’t require any new hardware. Instead, the app generates a barcode for your gift card, ticket, or boarding pass and merchants can use a barcode scanner to scan your phone, much in the same way that apps like Starbucks work. 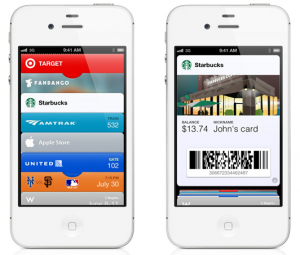 The number shows promise, especially as consumer adoption of smartphone, tablets, and other digital mobile technologies grow. However, the result of this is still uncertain as there are rivaling technologies and players who are trying to replace your physical wallet. Google is rolling out its NFC-based Google Wallet, which are supported on a limited number of Android smartphones and requires the phone along with the merchant to have NFC chips and radios. Apple has its passbook, which works with existing barcode scanners and the company will likely need to grow the number of companies–including banks and credit cards–that support Passbook. And then there is the Google Wallet rival, Isis, which has been delayed a number of times and is formed by the coalition of AT&T Mobility, T-Mobile USA, and Verizon Wireless. Only Sprint is excluded as a major U.S. carrier as it currently supports Google Wallet.

On Android, there are a number of alternatives to Passbook made by third-parties.