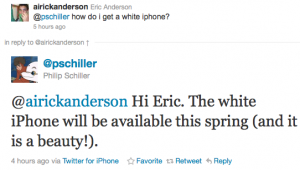 For those who had the patience to wait for the white edition of Apple’s flagship iPhone 4, the phone will be coming in Spring according to Apple’s most recent prior PR announcement and a recent tweet by Apple executive Phil Schiller on Twitter.

Schiller writes that the “white iPhone will be available this spring,” and adds that “it is a beauty.”

The phone has been delayed for unknown reasons numerous times by Apple, though enterprising hackers have come up with replacement kits that would resemble Apple’s OEM look for the white model. Although white iPhone models have been offered in the past in previous smartphone generations, the iPhone 4 marks the first time that Apple is making the front panel white in addition to a rear glass plate that is white. Previous plastic white iPhones only had the rear plastic cover in white and that model also used the same black bezel design as the black iPhone.