Though Apple has long led the high resolution display charge with its Retina Display, a marketing term that debuted on the iPhone 4, screen resolutions on the company’s current Retina Display iPad Air and iPad mini are being outpaced by Android rivals. It’s now rumored that Apple will be experimenting with pushing the display resolution beyond current Retina Display standards for 2014, with a 2K and 4K resolution tablet. Such a computing device would also come with a larger display and may launch as early as April 2014.

According to latest reports coming from Apple’s supply chain, the company is working to expand its tablet lineup with a larger-screened 12.9-inch model, which would place this tablet close in size to Apple’s MacBook Air and MacBook Pro models where screen size is concerned. 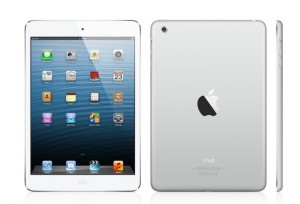 Chinese language Pad News is reporting that Foxconn is currently prototyping the 12.9-inch iPad with a 2K resolution display.

Reportedly, a 2K model may launch this spring while Apple may be working on a 4K resolution display as a minor refresh for later in 2014, possibly launching around the fall timeline.

A 4K iPad would offer double the amount of pixels that the current iPad Air has, and the larger iPad would have a resolution of 4,096 X 3,072 pixels. For comparison, some of the high-end Android tablets–like Samsung’s Galaxy Note 10.1 2014 Edition, Google Nexus 10, and Amazon Kindle Fire HDX 8.9–come with a 2560 X 1600-pixel resolution display.

The device could be named the iPad Pro, though the device had been dubbed the iPad max and iPad maxi in prior rumors.

As Apple is pushing the tablet resolution higher, it appears that in 2014 smartphones will also be pushing into higher resolution territories with Meizu’s Android-powered MX4G to sport a 5.5-inch display with a similar resolution to Apple’s iPad Air.

All this is still considered speculation right now, but as PC sales are facing the hardest declines this year, a larger, higher resolution tablet could help Apple capture lost PC sales and migrate these users over to the tablet computing experience.

In addition to Apple, rival Samsung is also rumored to be working on a larger 13-inch tablet.