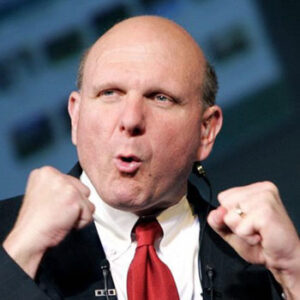 Here’s a rumor that’s sure to make the heads explode of fanboys from all corners: Steve Ballmer is said to be speaking at the keynote at Apple’s Worldwide Developer’s Conference next week, talking about using Visual Studio 2010 to build apps for the Apple environment. Let the Internet be set ablaze!

The rumor is being floated on Barron’s (by way of BGR). While it may seem a case of strange bedfellows, the move, if true, makes perfect sense in the battle royale of the mobile wars.

Adobe is accusing Apple of not playing fair because they won’t allow apps translated from non-native languages (like those originally written in Flash) on the iPhone OS. Per their revised developer agreement: “Applications must be originally written in Objective-C, C, C++, or JavaScript as executed by the iPhone OS WebKit engine, and only code written in C, C++, and Objective-C may compile and directly link against the Documented APIs…” This effectively cut out the possibility of translating Adobe Flash apps into iPhone apps. Microsoft’s Visual Studio, however, does allow developers to work natively in the C languages. Thus, the argument that Apple restricts app development to their own tools may soon be thrown out the window. (Mostly. I assume VS will rely on an Apple-designed plug-in for iPhone app development.)

The bigger news, however, is this would mark the end of Mac-only development for the iPhone OS. Up to this point, Apple had restricted their development tools to Mac OS X (which was logical given the iPhone OS is a scaled-down version of it). Opening it up to Windows users unlocks a huge developer audience for them. We live in interesting times.