While Wall Street may still be cautious about Apple’s future potential, forcing the tight-lipped company to tease that new and exciting product categories are coming this fall, developers are still eager to see what Apple has in store for its iOS mobile platform and OS X desktop ecosystem. The company’s annual WWDC conference for developers hosted during the summer period sold out in less than three minutes after tickets went on sale. This is in comparison to rival Google’s record-setting sellout time in just 50 minutes for its Google I/O conference slated next month.

Boasting apologetically that tickets had sold out as soon as they went on sale at 1 PM Eastern Time, Apple advised developers that “you will still be able to take advantage of great WWDC content.” As reported by Pocket-lint, Apple will be filming sessions and tracks that are happening at WWDC this year and making them “available as they happen,” rather than weeks after the event like in previous years. 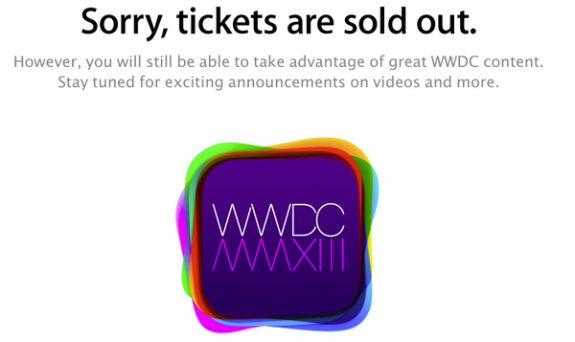 And prior to tickets going on sale, Apple CEO Tim Cook had teased in the latest earnings call that developers will not want to miss this showcase event, “We’ve got some really great stuff coming in the fall and across 2014.”

The company’s been rumored to introduce anything ranging from an iWatch smartwatch, an iCar, to an iTV.

Cook is playing up Apple’s 2013 strategy by saying that “amazing new hardware, software, and services” are coming, but he also hinted that new products may not arrive until fall.

Apple is facing some stiff competition from the Android camp with popular new flagships launched recently by Samsung in the form of the Galaxy S4 and the HTC One, the phone with the design to beat this year. BlackBerry will be debuting new plans at its BlackBerry Live conference next month and Google I/O will be happening at that same time with likely a big emphasis on the new Google Glass that is now shipping. After Apple’s announcement, Microsoft will be following up with its BUILD developer conference in late June to preview new things that will be happening with Windows Phone, Windows RT, and Windows 8.

Apple’s WWDC will be taking place in San Francisco, California between June 10 and June 14.