Cortana, the digital personal assistant that can create reminders, message contacts and track random trivia, has arrived on Apple’s iPhone and Google’s Android operating system. Available for free, the apps bring a lot of what makes the personal assistant useful on devices running Windows 10, to devices that users actually have in their pockets.

Microsoft revealed that Cortana for iOS and Cortana for Android were out of closed beta this week in a post on its Windows Blog. Microsoft revealed that Cortana would come to smartphones and tablets with software other than its own in July when it began letting users update to Windows 10 absolutely free. Cortana is a natural way for users to interact with their PCs. Like Siri on the iPhone, she takes orders and makes recommendation of activities and food. Like Google Now, she’s able to search the web for answers to questions and use location data for traffic recommendations. Cortana launched with Windows Phone 8.1, but mostly stalled because it wasn’t available on other platforms. 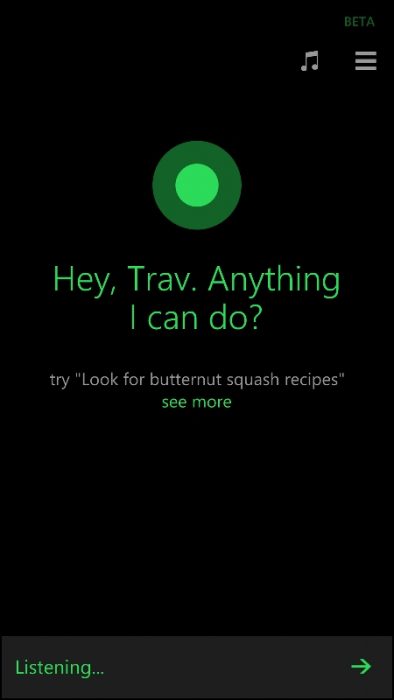 Cortana for iPhone and Cortana for Android sync directly with the Microsoft Account that users have on their PC already, making any information shared with Cortana already easy to track. Reminders on these new Cortana apps can still be set with a time or location in mind. Appointments sync from Windows 10 PCs to Cortana on iPhone, just as easily as Cortana syncs with Windows Phone.

Both of the new versions of Cortana track flights and packages, just like Cortana on Windows 10 too.

Cortana for Android generally goes a step further than the iPhone version because Android offers it more capabilities. Users don’t have to hunt around for the Cortana app on their Android devices before giving a voice command. The “Hey Cortana” voice command works on Android smartphones and tablets – provided that users are still on the Home screen. Android users also get missed call notifications, something that many assumed would only be available of Windows Phone.

Read: Cortana Coming to iPhone & Android Could Change Everything

Users with Cyanogen installed on their smartphones can use Cortana’s voice activation features at anytime, plus have the personal assistant change settings, mute alerts and more. Again, these are features that many assumed wouldn’t be in any other version of Cortana besides the one built into Windows phones. Cortana for iPhone can’t do any of this, forcing users to mix Cortana and Siri to make use of all the features their device offers.

Cortana for iPhone is available in the United States and China to anyone that has Apple’s iOS 8 operating system or later. Cortana on Android requires Android 4.1.2 or later. Users with Cyanogen, which is a really a heavily modified version of Android, will get an update sometime this month that adds the assistant.

Overnight, adding these apps makes Cortana and Windows 10 more viable. Windows 10 mainly focuses on right the wrongs from Windows 10. Windows Store apps open in the Desktop. Unless Tablet Mode is enabled, there’s a Start Screen instead of a Start Menu. Cortana one of the few features in the upgrade that isn’t a fix or feature meant to address a prior shortcoming.

Microsoft put a search box on the Windows 10 Taskbar for quickly accessing Cortana, but having the companion apps available means users are more like to embrace the personal assistant. The best features are with users no matter what the device they’re using. Cortana is the third of the major personal assistants to officially be available across devices. Google Now is available on iPhone and Android. Amazon’s Alexa app is available on iPhone and Android too.

Microsoft says that it’ll continue adding new options and features to Cortana on iPhone and Android on a regular basis. It’s done the same for Cortana in Windows 10. There’s just a single major new release of Cortana left this year. Microsoft said earlier this year that it plans add the personal assistant to its Xbox One entertainment console before the year’s end.