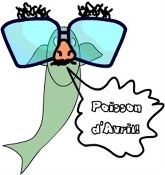 It is always a good idea to be skeptical on April Fools Day, especially on the web. We’ve avoided (so far) April Fools Day silliness hear at GBM, but the rest of the web has been having its usual love/hate relationship with silly pranks and elaborate mischief. Google, as usual led the way, among other jokes, changing its company name to Topeka, in honor of the town that changed its name to Google to try and win over Google to bring dark fiber connectivity there. I found it interesting that there was some skepticism last night when the main stream media started dropping iPad reviews, with several folks suggesting they were pulling an April Fools prank.

TechCrunch has what they call the definitive roundup of April Fools on the web, but I’m sure there are others out there.

So, whether you love or hate April Fools Day, Poisson d’Avril.