Archos 9PC Tablet and Blurring the Line Between Device Categories 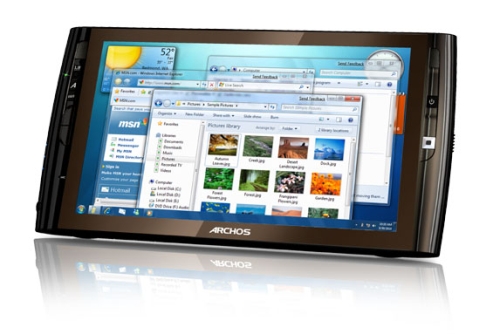 We’ve seen this coming for quite some time. Archos, well know for their portable media players (PMP) has been slowly adding more and more features like WiFi and encroaching on the line that separates PMPs from Tablets, UMPCS, MIDs, Netbooks, etc… In fact they released a Netbook a short while ago.

Now, the Archos 9PCTablet continues the line blurring by looking and apparently being capable of acting like more than just a PMP. The slate form factor has a touch screen and optical mouse, is powered by an Intel Atom Z515 chipset it looks very much like a MID or the newer UMPC models out there (can you say Viliv?) Especially since the spec list says that it will be running Windows 7.

I’ve always maintained that many consumers don’t pay much attention to what device does what and has which specs, as long as they think they are getting value for their money and the device can do what they want it to, they could care less if it was a PMP, a Tablet or a Netbook. I think Archos might be on to something.

No word on price and expect a release later this year. Here are some more specs: