File this under the category of everything good can also bring with it something bad. Tablets continue to proliferate and find there ways into households across the globe. For many that’s a positive outcome. We follow stories of young children being able to use iPads and other Tablets with glee, sometimes amazement, and increasingly with an attitude of acceptance. But some are postulating that this tremendous Tablet growth might actually lead to overexposure among the youngest set. That in turn, some say, leads to iPads harming early childhood development of motor and social skills. 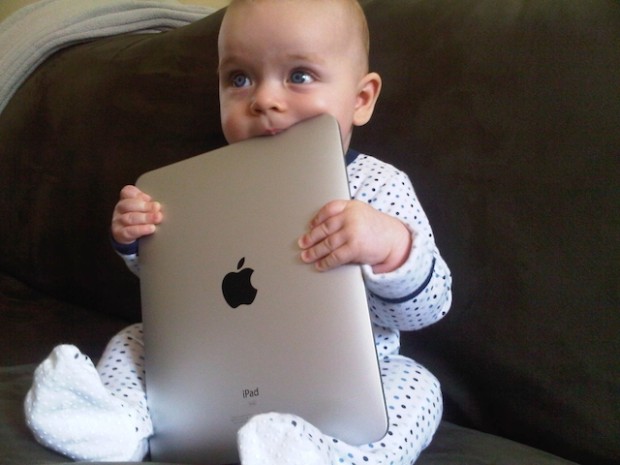 Photo from kids and iPads: Circles in the Sand

In a report from The Telegraph, the Association of Teachers and Lecturers is warning that young children might be very proficient at swiping across an iPad screen, but that they are seeing evidence that this may correspond to a lack of development in traditional early childhood development skills.

Rising numbers of infants lack the motor skills needed to play with building blocks because of an “addiction” to tablet computers and smartphones, according to teachers.

Many children aged just three or four can “swipe a screen” but have little or no dexterity in their fingers after spending hours glued to iPads, it was claimed.

Members of the Association of Teachers and Lecturers also warned how some older children were unable to complete traditional pen and paper exams because their memory had been eroded by overexposure to screen-based technology.

The report continues to state examples, such as one doctor who treated a four-year-old, among other children, with therapy for compulsive behavior that he says can be traced to exposure to the Internet and digital devices since birth.

Colin Kinney, a teacher summarizing what he has heard from other teachers says,

I have spoken to a number of nursery teachers who have concerns over the increasing numbers of young pupils who can swipe a screen but have little or no manipulative skills to play with building blocks or the like, or the pupils who cannot socialise with other pupils but whose parents talk proudly of their ability to use a tablet or smartphone.

Before you shout “Right on!” or decide these teachers are off their rockers, let’s examine a few things.

First, innovation in many areas of human endeavor (for good or bad) leads to the replacement of the necessity for some skill sets as it disrupts current assumptions. In many circumstances those innovations lead to more efficient means of accomplishing the same tasks. As an example, I know a number of designers who, although they understand and have been taught the basic principles of drafting by hand, can’t do so effectively. Instead they rely on Computer Aided Design (CAD) to perform the tasks they need to.

Second, motor skills are indeed a necessary building block of human development. But it could be argued that children in today’s “Tablet age” are developing newer motor skills as they work with small screens. Of course that argument quickly retreats to one of balancing the acquisition of new skills while retaining development of traditional ones. I don’t think you can argue that children who learn these new motor skills at an early age won’t have an edge on those that don’t. The question becomes which of the older skills will remain important and necessary and how to balance the old with the new.

As an example, go a few developmental steps beyond young children working with building blocks. I don’t think there are many who haven’t heard complaints about the fact that handwriting isn’t taught the way it used to be in schools, if at all. One can argue that handwriting will always be an important skill. But one can also envision a day where a tap of a screen, a touch of a button, or an electronic signal between two devices render physically signing a document an unnecessary, if not meaningless act.

Third, socialization skills are always evolving and not just in relation to technology. Although tech innovations bring about the most easily identifiable and swiftest changes in how we relate to others. Like it or not, younger generations now have the capability to socialize within much larger communities than those defined by the political or geographic boundaries of a school district or church parish. The task of learning a foreign language, it has been argued, becomes easier for each successive generation because each new crop of youngsters is exposed to different languages at earlier ages. It is also argued that younger minds have less difficulty incorporating the learning of multiple languages. Of course it could be argued that computerized translation services might make that all a moot point in the future as well.

Fourth, there is a reason that countless blog posts and media stories are filled with stories of how young children quickly adapt to these new technologies. Younger minds haven’t been exposed to the same structural games each generation plays with the next to teach the tasks necessary for development. Its easier to think outside of the box if you’ve never been exposed to the box. Is that a good thing or a bad thing? History would argue the former.

Finally, much of this, like any debate, depends on the desired outcome. I won’t attempt to argue the distinction between what developmental skills are important or necessary and which aren’t. That’s not my field of expertise. I will state that my observations lead me to believe that those of us in control of the world at any given moment might bemoan the negative side effects that new innovation brings, but we have the same goal: to see our children succeed and prosper. Our overseeing of the development of future generations can often be so caught up within our own paths, that it is easy to forget that some, if not many, paths lead to newer paths, not necessarily a final destination.

Or as my grandfather used to say, “if you think the river begins here and ends there, you need to quit looking at the map and raise your sights.”

Photo credit: kids and iPads: Circles in the Sand