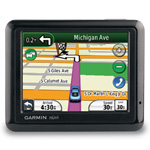 I think the days of standalone portable GPS devices are numbered. There will always be room for specialty devices, such as those tailored for outdoorsmen, but I don’t think consumers will rush out to buy dedicated units once they get used to using their phones’ GPS capabilities.

Auto manufacturers charge a steep premium for in-car navigation units, but I think that will also change. I finally got a car with a built-in navigation system and the experience is miles ahead of any standalone GPS unit I’ve ever used. It has a nice big display and I like that its in the dashboard, rather than hanging onto it for dear life. It recognizes my voice commands and is fully integrated with the rest of the car’s electronics. This means it knows to stop barking commands while I’m on a phone call.

I’ve long since ditched my Garmin GPS and primarily use my car’s built-in navigation system. When I’m on foot or out of town I use my Viliv S5 and iPhone 3GS.

Do you agree with the analyst’s ‘terminal decline’ prediction? Or do you think you’ll be buying one sometime soon?