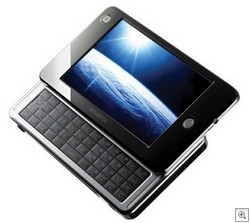 You read that headline right. Apparently the GigaByte M528 MID is now available for pre-order but at a price of $1131 US? I’m confused. Sounds like the folks at GigaByte are too as that price dropped quickly from the original pre-order price they came out with of $1450 US.  Interesting that mate Hugo Ortega’s company Tegatech is offering the pre-order. (Tegatech is an Australian company so the prices listed here are US). So, Hugo give us the inside skinny here. What’s up with that pricing? That’s quite a price premium for being the first out of the chute for a class of devices that supposed to cost, er… um… well… not that much. UMPCPortal thinks the price drop from $1450 to $1131 is a bit more acceptable. From where I’m sitting if MIDs don’t come in under $600 they are dead before they start.

But hang on. Is this a MID or a UMPC? TegaTech lists it as a UMPC. Most of the world has been calling it a MID up until now. Do I sense some confusion reigning? You betcha.

UPDATE: Chippy’s been doing some math and I’m not sure the conversions make sense or they are just wishful thinking, but he’s now estimating that price in US dollars at about $750. I’m guessing this is far from over, but hey, this still has to come down a bit from $750 before I’d think about this.