Are you nerd enough for the Looxcie Wearable Camcorder?

I’m not one of those guys who wears a Bluetooth headset everywhere, but the new Looxcie Wearable Camcorder might just convince me that resistance is futile. 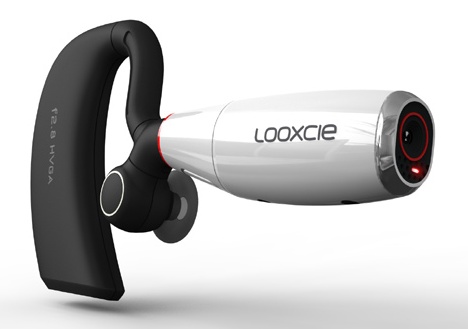 The Looxcie is a video recorder that is worn over the ear like a typical Bluetooth phone headset. In fact, it doubles as a phone headset, offering up to 10 hours of talk time, unless you record video, which is the real reason for its extra-large battery.

The video records in 480×320 at 15fps. The lens offers a 62-degree field of vision. 4GB of onboard storage is enough for five hours of video encoded at 800kbps in MP4 format, but record time is limited to four hours per charge. The video automatically loops if not downloaded via USB. Video quality is not spectacular, though you can judge for yourself with their YouTube video, but the experience is about convenience, not performance.

The fun part, aside from being able to record bits of your life as they happen, is that it pairs with a smartphone (currently limited to Android) for viewing, editing, and sharing. Using the Looxcie App, an Android phone can display the video as it is being recorded, review stored video, create 30 second clips of stored video, and receive instant clips of the last 30 seconds with the press of the Instant Clip button on the headset. Clips can then be edited and shared via Facebook, YouTube, email, etc. Instant Clips can be shared automatically by holding down the Instant Clip button.

That sharing and pairing feature, as well as its dual-function as a phone headset, are what set this apart from other wearable camcorders. As much as I’d like to be able to record every interesting thing I see, I can’t see myself wearing a camera just for that purpose. However, I’m not averse to wearing a headset while driving, which is when I often see those interesting things I can’t record. Add in the ability to share clips on the spot, and I’m hooked.

The Looxcie is already listed on Amazon but is not available yet. Price is $199. Software for smartphone control is limited to Android 2.0+ and even then they have a set list of supported devices. They seem to be distributing the software directly. No word on other operating systems, but since those releases would go through a store/market, it’s best that they wait until the device is out (releasing a device-specific app without the device is just asking for one-star reviews). Wouldn’t mind a Windows application either, perhaps with the ability to stream and store video on a PC.