The strangely named Arqball Spin uses the camera in your iPad or iPhone to create 3D models of just about anything.

Arqball Spin creates 3D models of objects by taking a series of photos of a rotating object and stitching the photos together. The end result are 3D images that anyone can view on other iOS devices or desktop computers. Technically the model isn’t really 3D, but it looks 3D as it’s rotated. 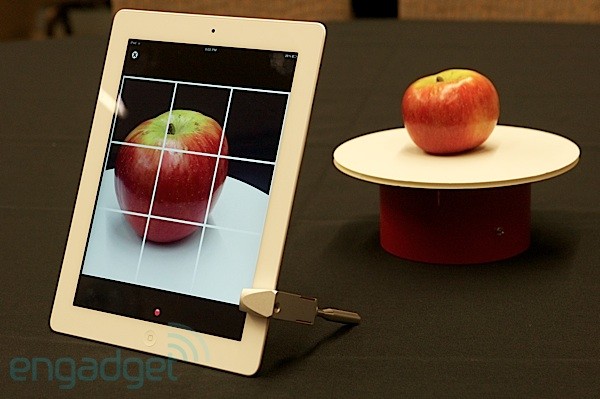 The tricky part of Arqball Spin is that users need to hold their iPhone or iPad steady as it moves around the object. The easy way to solve this problem is with a “stage” that holds objects and rotates slowly. Arqball has schematics for users that want to create their own 3 RPM stage. Or, for people who don’t want to create their own stage there’s a Kickstarter page.

Here’s a sample of the finished 3D product, embedded below.

With a $60 donation on Kickstarter users can get their own Arqball stage that should ship in June. The stage will cost $80 after the Kickstarter is over on May 18. It’s still possible to create the 3D models without the stage, but it’s nowhere near as easy.

For now Arqball Spin is only for iOS devices, but the team will soon build in support for other platforms (presumably Android) as well as DSLR cameras. According to Engadget, DSLR support will mean users take all the required photos themselves. Users then upload the photos to Arqball’s website for stitching. The 3D models can then be embedded in websites via HTML5, or shared on Twitter and Facebook. There’s no word on when Arqball will add those features, so for now it’s just for iPads and iPhones.