As the growth momentum for the iPhone starts to slow and Apple’s iPad market share is predicted by some analysts to dip for the first time below 50 percent this year, will Apple turn to its hobby, Apple TV, for a revival? Apple had turned away from its desktop and Mac business several years ago to focus on the fast growing and lucrative mobile market, and the successful launches of successive iPhone and iPad models suggest that the company had timely predicted the right shift. However, now that the U.S. market is becoming more saturated with these popular devices, where can Apple turn to? One possibility is Apple TV, though Apple is still playing coy about its intentions in the living room space.

The company’s sales of 47.8 million iPhones still shows growth, and despite record-breaking profits, investors remain spooked as the market questions how long Apple can continue this momentum. With the PC market declining and Mac sales down, iPhone sales starting to plateau, Apple still has one hope in the form of Apple TV, a hobby that it’s been experimenting with and incubating. 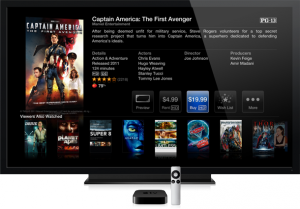 When asked by an analyst on its earnings call about Apple TV, CEO Tim Cook responded that there is still a lot that his company “can contribute in this space so we can continue to pull string to see where it leads us.” Cook’s comment dodged the underlying enquiry of whether Apple will build a full blown television set with a new UI instead of the diminutive set-top box accessory.

In fact, sales of the hockey puck-sized Apple TV units grew. Apple sold 2 million units this past quarter, compared to just 1.4 million a year ago for the same period.

The TV and living room may present new opportunities and challenges for Apple. The opportunity is important for Apple, especially in more wealthy nations where it can charge a premium for a better television watching experience.

Carriers are Exploring New Emerging Opportunities Beyond Phones and Tablets

The slow down in the smartphone and tablet space in the U.S. is something that Apple’s competitors and partners are also trying to avoid. Carriers, like Sprint Nextel and AT&T Mobility are looking towards new ways to extend connectivity beyond phones and tablets. Sprint has created a research center in Burlingame, California to explore machine-to-machine solutions, which is just industry jargon for finding new ways to embed 2G, 3G, or 4G mobile broadband connectivity into different things, whether they’re e-book readers or digital billboards, or cars and ambulance and emergency response equipment. AT&T’s vision is the connected home and car where you can tap broadband or mobile broadband connectivity to control and secure your home, interact with and quickly retrieve and access information in your car, and manage everything from a single hub–your smartphone or tablet.

Rival Samsung, which operates in the same hardware space as Apple, may find growth in other consumer electronics business lines. The company makes a variety of CE products, from cameras to phones to appliances and TVs. Samsung may be less likely to be affected by changing trends in the mobile space as it has other businesses to cushion it from market effects. Apple, on the other hand, currently only builds PCs, laptops, tablets, and smartphones along with the software that powers all these devices.

Another opportunity that Apple hasn’t been shy to admitting is exploring what it could do in emerging markets. Though Apple doesn’t want to lose the premium cachet it branded itself with, a more affordable iPhone with modern specs could go a long way in markets like China and India where the price of a phone can be as much as $1,000 with heavy taxation and average income is far less than what a U.S. person would make. Apple’s rivals have been aggressively targeting these markets with inexpensive devices and Apple will have to find a balance between its premium experience and brand image and the realities of the market for growth.