Without an “official” smartwatch platform or solution from Apple, Google, and Microsoft, developers and entrepreneurs are now looking towards Windows Phone for new opportunities. One such company is Secret Labs, which has gained momentum for its AGENT project on Kickstarter for a smartwatch that will be compatible with synchronizing data and information with Apple’s iOS platform, Google’s Android ecosystem, and Microsoft’s Windows Phone. 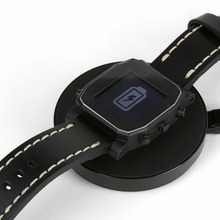 One of the more popular smartwatches on the market today that was crowdfunded is the Pebble Smartwatch, which serves as a companion device to Android and iPhone smartphones. On its own, Pebble doesn’t do anything, but when paired over Bluetooth with a smartphone, the Pebble watch could deliver notifications and alerts, show incoming calls and text messages, and like a traditional watch, Pebble could also tell you the time.

However, Pebble is currently limited to just iOS and Android and the watch does not pair with BlackBerry 10 or Windows Phone 8.

There are various tiers to back the project right now and acquire the watch for less than the $250 retail price when it launches at retail. At the time of this writing, the project has exceeded  its $100,000 goal by almost $80,000.

The good thing about this watch is that it works with Qi wireless charging, so no cables to plug in every night. You can even use the same wireless charging plate from your Nokia Lumia smartphone if you have one already.

With more hardware accessories being targeted at Windows Phone, this is good news for Microsoft, its hardware partners, and users of the platform as it shows that Windows Phone is growing enough to be a contender in a competitive industry. Windows Phone is now in a distant third place behind iOS and Android in terms of market share.

As with all Kickstarter campaigns, there are some risks to being a backer. you’re theoretically not “buying” the product–you’re just backing the project. This means that if the project doesn’t come to fruition, you’ll be out of whatever you pledged for the campaign.

This watch will require a phone to sync with, unlike a recent Motorola smartwatch patent application that could function as a standalone device.