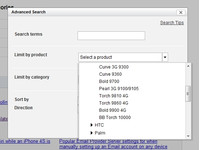 At this point, it’s unclear if the Torch 10000 will be a touchscreen-only device or one that will carry a slide-out keyboard in addition to a touchscreen. With the debut of the BlackBerry 7 operating system, Research in Motion had placed both hardware variants under the same Torch branding. A potential for the device is the BlackBerry 10 Slider that was leaked.

The device is targeted at a potential AT&T release in the U.S. as the information was spotted in a drop-down for AT&T’s phone insurance listing.

Via: Phone Arena via pocketnow