Asus has announced that they are adding 3.75G Internet access to its popular Eee PC line. The first in its line of Eee’s to ship with this HSUPA feature will be the Eee 901, released in October 2008. There is no word on carriers at this point. 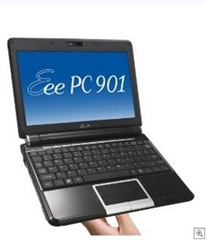 Check out the press release after the READ MORE link.

Taipei, Taiwan, September 24, 2008 Ã¢â‚¬” ASUS today announced that it will be adding 3.75G connectivity* to its hugely-popular series of Eee PCÃ¢â€žÂ¢ netbooks, enabling convenient and high-speed access to the Internet anytime, anywhere. The inclusion of 3.75G is a perfect addition to the Eee PC’sÃ¢â€žÂ¢ existing set of travel-friendly features such as its high portability, shockproof data storage and all-day battery lifeÃ¢â‚¬”strengthening its reputation as the ultimate solution for computing on the go.

With 3.75G, the Eee PCÃ¢â€žÂ¢ will be able to deliver on its promise of borderless one-day computing better than ever before. No longer bound to Internet hotspots, 3.75G-equipped Eee PCÃ¢â€žÂ¢ users will be able to enjoy low latency mobile broadband Internet access at high downlink and uplink speeds of up to 7.2 Mbps and 2 Mbps** respectively, regardless of where they areÃ¢â‚¬”ensuring a seamless connected experience on the go. The Eee PC’sÃ¢â€žÂ¢ 7.5-hour battery life*** provides more than ample power to keep it up and running during extended outdoor excursions.

Frequent travelers will particularly welcome the timely addition of 3.75G support, which comes as service providers around the globe are ramping up their adoption of 3.75G High-Speed Uplink Packet Access (HSUPA). This means that they will be assured of a reliable, high-speed mode of Internet access in many destinations around the world.

3.75G will make its first appearance in Eee PCÃ¢â€žÂ¢ 901 netbooks released to market from October 2008 onward.