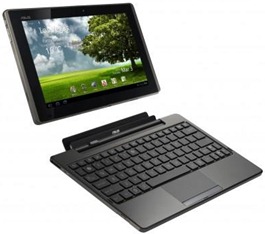 After having created one of the most sought after tablets in terms of features, functionality, and price, ASUS will be giving its Eee Pad Transformer Android Honeycomb slate a minor refresh come this August when it launches in the UK with a 3G modem. Current Eee Pad Transformer slates are going on sale with various storage configurations, but those models are only being offered as WiFi-only, meaning you’ll need to connect to a mobile hotspot router, a WiFi hotspot, or tether to get onto the Internet. With built-in 3G on the Eee Pad Transformer 3G, users can truly be untethered as they connect to the net.

Both the Eee Pad Transformer 3G and the Eee Pad Slider will launch in the UK come this August.

Unlike the Transformer with its unique optional keyboard dock that adds additional ports, a battery, and a touchpad, the Eee Pad Slider comes with a built-in tilt and slide keyboard sans touchpad.

Hopefully, Asus will also offer a 3G option for the U.S. market in the future as well.