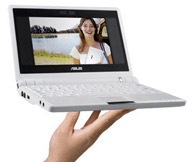 The ASUS Eee, that small, ultra-inexpensive notebook with Linux, has finally launched. Focusing on a Linux OS loaded on an SSD (no hard drive!), the Eee is set to ship later this month for $299-399, according to Engadget.

From the ASUS website, we can get a few more details. Apparently the strangely named Eee is Easy to Learn, Easy to Work, Easy to Play.

– 7" compact design and less than 1kg
– Durable, shock-proof solid-state design
– Rich network and wireless connectivity
– Graphic user interface for simplicity and ease of use
– Over 40 built-in applications for learn, work and play

At the proposed prices, this looks like a nice companion device. The higher end models are touting 3.5 hours of battery life, which would be quite nice, particularly for this size of device.