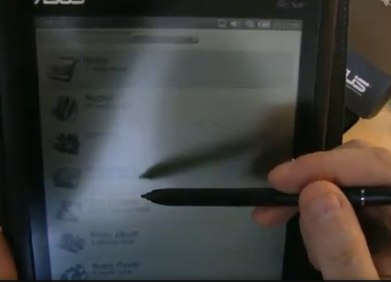 The folks at Netbooknews.com have gotten their hands on the peculiar Eee Note EA800 from Asus and put up an unboxing video. They give it a quick once over and note that they’ve been working with a Chinese language version of the device and an English language ROM that hasn’t allowed them much time.

Nicole Scott calls it an eBook Reader on steroids and Sascha calls it an Apple Newton on steroids and that’s why I call it peculiar. It has a black and white/gray screen but isn’t an eInk display. It’s running a Marvel chipset and comes with a small collection of Apps. It also supposedly allows you to take notes on the screen. It has a camera that takes color photos but you can’t display them in color on the gray scale screen. There’s a quick demo of the Inking within the video and the screen’s pressure sensitivity looks pretty good.