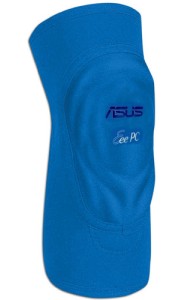 News out of Digitimes is that Asustek is preparing something they’re calling the “Eee Pad”. “Great,” I thought, “protective gear for ASUS Eee netbooks! Hope they come in different colors.” But then I read on to learn they were not like knee pads, but rather like tablet devices in the MID range. Sounds even better.

Asustek Computer is making preparations to launch a new device named Eee Pad featuring a 4- to 7-inch panel, and which will offer a combination of tablet PC and MID functions, according to industry sources. Current details of the Eee Pad suggest the product has been inspired by the rumors of Apple’s planned tablet device, the sources commented.