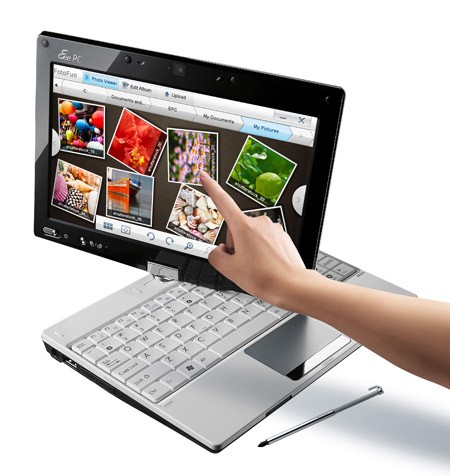 ASUS gave their Eee PC T91 convertible netbook/tablet an official launch at Computex this week. Press release is up on their site. Nothing we haven’t seen before in a CES preview, hands-on review and video demo, except for the marketing direction:

The Eee PCÃ¢â€žÂ¢ T91’s unique software applications, collectively known as TouchSuite, allow users to perform a myriad of fun tasks with their fingertips, such as touching up photos, creating photo albums, leaving handwritten desktop memos for loved ones, and sketching cartoons or custom emoticons.

The Eee PCÃ¢â€žÂ¢ T91’s tablet PC functionality makes it easy to cradle in one arm, enabling users to read documents, scribble ideas into digital notebooks and surf the Internet while traveling on foot. The Eee PCÃ¢â€žÂ¢ T91 is also equipped with a TV tuner* and Global Positioning System (GPS)* for extensive entertainment options and advanced navigation capabilities on the go.

Yep, they’re pushing both touch and pen input, not just touch (although the touch interface customization is very appealing), as making the T91 a fun computer with personality. They even specify it comes with a “well-designed” stylus, as opposed to something thrown in as an afterthought. That they’re talking up the mobility of the tablet form factor is also quite encouraging. I think a lot of people will take their first steps into the world of mobile computing with this tablet. Unfortunately, price and U.S. availability are still up in the air, so we’re still a bit in limbo despite the officiality.