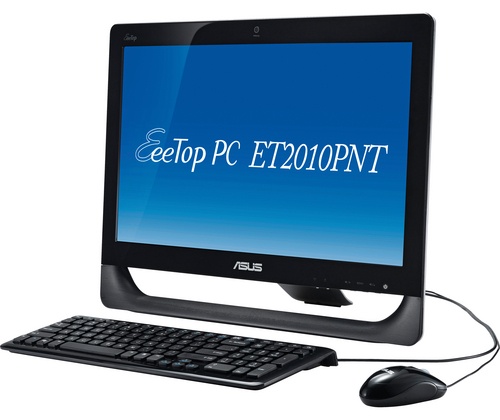 The touchscreen all-in-one market continues to heat up. ASUS is bringing up the low-end with their EeeTop PC ET2010 series available with a dual core processor/graphics combo of either AMD Athlon II X2 / ATI Radeon or Intel Atom / NVIDIA Ion.

Both feature Windows 7 Home Premium (64-bit), SRS Premium Sound, 802.11b/g/n Wi-Fi, a DVD drive, HDMI out, and a 20″ 1600 X 900 multi-touch display. No details on the touch hardware, but according to an early review at Newegg, it detects finger proximity before screen contact. That indicates IR detection (capacitive can also detect proximity but this is far less likely given the price range). The review also notes support seems limited to two points of contact (though that could depend on the software they used).

The two models are the ET2010AGT and ET2010PNT with the following features. The AMD model is a tad beefier (bigger HDD and higher memory support) and comes in around $700, while the Intel model is around $650, not counting discounts.