At Mobile World Congress in Barcelona Asus announced the new PadFone Infinity, the 5-inch 1080p smartphone that docks into a 10.1-inch tablet.

The PadFone Infinity is the first PadFone device to support 4G LTE. 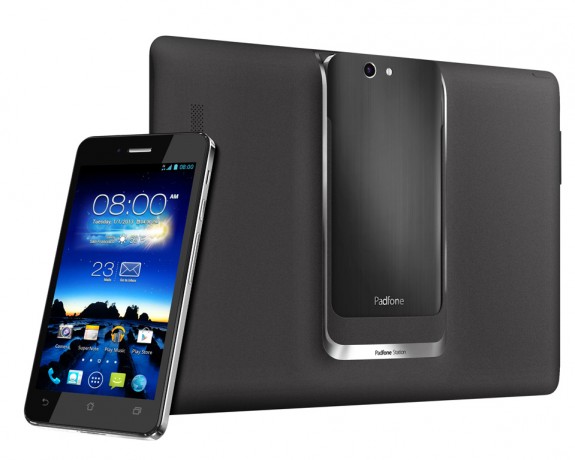 The PadFone Infinity uses the new quad-core Snapdragon 600 processor running at 1.7GHz, and will come in both 32GB and 64GB models. The phone itself holds a 13MP rear-facing camera and a 2MP front-facing camera for video chat. The tablet also has its own front-facing camera so users can still video chat when in tablet mode. Presumably the tablet can also use the phone’s 13MP camera to take photos.

The PadFone Infinity Station serves multiple purposes for PadFone Infinity users. First, it lest users run the same apps on their tablet and phone with the same data in both versions. It also means that users won’t have to buy a separate data plan for their tablet, as the phone powers the larger display.

There’s no word on a U.S. release of the Asus PadFone Infinity. So far the device was only announced for Europe and Asia. The phone will arrive first in Europe this April for a price of £799 / €999 (about US$1200/US$1300) which includes both the phone and the dock.