We brought you news about the Asus S101 Eee last week, which is Asus’ shot across the bow of the thin portable makers. Apparently if you’re if you’re in the parts of Asia bordering the Pacific you could see this released tomorrow. Those in Europe will see it in a couple of weeks and it is targeted for the US for sometime later this month. One note on that though, according to Engadget, only 1000 will be available in the US initially. No word on pricing yet. 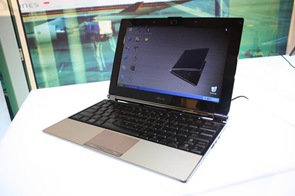 Speaking of Engadget, Engadget Chinese got there hands on the unit and have posted up a series of pictures for you to ooh and ahh over.

Only one question. Where’s the feather?